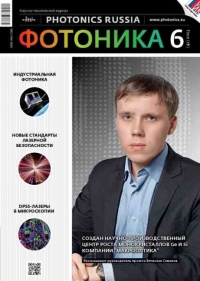 New 515-nm diode-pumped, solid state (DPSS) lasers can fill a gap in the compact laser products line. The new technology will be in demand for biological applications while investigating living cells, when using, confocal, FRET, FRAP and TIRF microscopy and flow cytometry.

Issue #6/2013 L.Kaestner, P.r.Lipp, D-von- Gegerfelt, H.Karlsson, E.Illy, J.Hellström
Fluorescence microscopy of living cells using new 515-nm DPSS-lasers
New 515-nm diode-pumped, solid state (DPSS) lasers can fill a gap in the compact laser products line. The new technology will be in demand for biological applications while investigating living cells, when using, confocal, FRET, FRAP and TIRF microscopy and flow cytometry.
Теги:   confocal microscopy   dpss lasers   dpss-лазеры конфокальная микроскопия   flow cytometry   frap-   frap and tirf microscopy   fret   fret-   solid-state lasers   tirf- микроскопия   проточная цитометрия   твердотельные лазеры
In the green-yellow spectral range of visible light there are currently no laser diodes available as yet, although suitable semiconductors with an adequate band gap are in an early stage of development (e.g. [1, 2]). Therefore, this spectral range is currently covered by DPSS lasers, with typical laser lines of 488, 532 and 561 nm. Until now there was one important gap, however, around 515 nm; a wavelength around which many fluorochromes (fluorescent markers or “tags” attaching to the microscopic objects to be studied) can be excited (figure 1). Due to the lack of alternatives, and despite all the disadvantages that an ion laser system brings with it, argon and argon-krypton lasers have been used to fill this gap.
We describe below the technical background and applications for an innovative DPSS laser, which with its 515 nm emission now can replace the argon laser.
Technical concept
Standard broad-striped edge-emitting laser diodes are used as pump sources for the new DPSS laser. The gain medium is an Yb-doped laser crystal emitting at 1030 nm. The emission is coupled into a second crystal within the resonator (figure 2) made from periodically poled potassium titanyl phosphate (PPKTP) for efficient intracavity frequency conversion [3]. Spectral filters make the laser operate in a single longitudinal mode (<1 MHz bandwidth), which results in very low noise and stable output power over a wide temperature range (figure 3).

The use of a separate curved cavity mirror ensures a very high transversal mode quality (TEM00) in the output beam at all output power levels. The laser cavity is enclosed in a small and robust hermetically sealed package, which provides a very high degree of resistance to varying ambient temperature and humidity conditions as well as to mechanical shocks and vibrations.
The laser concept is inherently power scalable. Initially introduced as a 25 mW laser, a 50 mW model is available in the meantime in order to support more power demanding applications such as FRAP (fluorescence recovery after photobleaching), high-speed cell sorting, plate reading, and high-speed spinning disc confocal microscopy (cf. section 3).
Applications
In recent years, diode lasers and diode pumped solid-state lasers have become the first choice in nearly every new or updated bioanalytical instrument in which gas lasers had previously been used. These affected applications include flow cytometry, DNA sequencing and microscopy techniques such as confocal laser scanning microscopy, total internal reflection fluorescence (TIRF) microscopy or fluorescence correlation spectroscopy (FCS).
Many fluorescent dyes and fluorophores have their absorption maxima around the 514.5 nm argon-ion laser line (figure 1). These include e.g. anti-body markers like Alexa Fluor 514 and Oregon Green 514, the yellow fluorescent protein eYFP, fluorescent protein-based fusion proteins such as the calcium indicator Premo Cameleon as well as one of the many constructs that are based upon Förster resonance energy transfer (FRET, also fluorescence resonance energy transfer) between the cyano fluorescence protein (CFP) and the yellow fluorescence protein (YFP). Further markers with absorption maximum close to 515 nm are e.g. SYBR Safe, a substance, which can replace the toxic ethidium bromide (EtBr) for DNA gel staining, 6-JOE, used in automated DNA sequencing, or FIAsH, a minimally invasive tetracystein-based protein tag, the protein linker of which consists of just one peptide made from six amino acids.
For such applications, requiring a laser excitation line around 514.5 nm, system suppliers have had to add a bulky argon-ion laser to their equipment, often in a separate external box and coupled through an optical fibre, even when all other laser lines could be reached using small solid-state lasers integrated into a desktop instrument. The 515 nm Cobolt Fandango is now a solution to this problem. From recent tests of its function at the Institute for Molecular Cell Biology at Saarland University, we describe here some of the applications in confocal live cell imaging.
Live cell imaging
In modern biomedical research, high-resolution fluorescence microscopy for the study of living cells plays an increasingly important role. This accounts for structural and morphological investigations as well as for dynamical processes all the way to the visualization of biochemical reactions. Several of these signal processes, especially in the brain and in heart muscles are so fast that a frame rate of several hundred images per second is necessary.
Conventional confocal microscopes are usually not able to reach such imaging speeds and thus multi-beam approaches, in which many parallel laser beams are used simultaneously, as well as slit-scanning confocal microscopes have become more and more common in the last few years. Currently, the most popular instruments are based on the so-called Tandem-Nipkow-Scanner, see figure 4, the scan head being manufactured by Yokogawa Inc. and implemented by a number of different companies. Other examples of multi-beam scanners are the “Swept-Field” confocal microscope (Nikon, Japan) and the “Kilobeam Array Scanner” (VisiTech, UK). As the output beam from the laser in these instruments is split into several beams, a laser output power level of at least 20 mW is required.
To test the Cobolt Fandango 515 nm laser in fluorescence microscopy, the laser was directly coupled into a VT-Infinity (VisiTech, UK) multi-beam confocal microscope set up for live cell imaging. Figure 5 shows images of the mitochondrial network in cells from a kidney cell line of the African green monkey (COS-1). The fluorescence comes from the yellow fluorescent protein eYFP, which was fused to the mitochondrial specific sequence from the subunit VII of the cytochrom C oxidase, and thus exclusively expressed in the mitochondria. From the 3D reconstruction details, it is obvious that the mitochondria – contrary to the typical textbook illustrations – are not always egg-shaped, but that they can have many different and highly complex, shapes.
In another example a dynamic translocation of the signal molecule protein kinase C!, again coupled to eYFP, after a physiological stimulus with ATP, is shown (figure 6). Also here the host cells, expressing the fusion protein, were COS-1 cells. The interpretation and relevance of this process go beyond the scope of this article (for more information see e.g. [4, 5]). It is nonetheless clear from this demonstration, that dynamic processes in living cells can now successfully be analyzed in systems using a DPSS laser optimised for eYFP.
Outlook
Far more important applications for this laser (than these examples using single staining of YFP) will be for quantitative parameter determination, using the to date widespread constructs with cyan fluorescent protein CFP. This is relevant for intra-molecular FRET microscopy e.g. with ”Cameleons” (such as Premo cameleon, cf. figure 1) or kinase sensors, inter-molecular FRET for the detection of receptor bindings or other molecular interactions. ▪
Photonics Russia. Issue #6/2013
Readers feedback
Leave a feedback