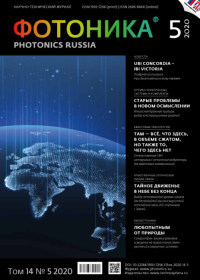 We have developed a method for the laser formation of a biocompatible surface morphology of titanium dental implants, providing a hydrophilic surface structure that has both micro- and nanorelief. We present this work in two parts. In this first part, we substantiate the physical and functional properties of biocompatible implant surface. Using laser structuring on the surface of titanium dental implants, superhydrophilic reliefs of micro- and nanoscale were formed. The period of structures in the form of holes was 50 μm, and 30 μm in the form of grooves. The results of a study of the physical and chemical properties of biocompatible surface morphology are presented.
Tags:   dental implants   implant success   in vitro   in vivo   laser surface treatment   preclinical studies   wall-to-wall production   дентальные имплантаты   доклинические исследования   лазерная обработка поверхности   полный цикл производства   приживаемость
Conferences, exhibition & seminars
O. V. Kharchenko
The XXVI International Symposium “Atmospheric and Ocean Optics. Atmospheric Physics” DOI: 10.22184/1993-7296.FRos.2020.14.5.438.440
Opto-electronic systems and complexes
А. V. Medvedev, A. V. Grinkevich, S. N. Knyazeva
Image Intensifier Tube or Television Matrix: Aspects of Application Efficiency DOI: 10.22184/1993-7296.FRos.2020.14.5.394.408

The results of studying the characteristics of integrated optical modulators of both types, amplitude and phase, developed and created at the A. F. Ioffe PTI jointly with ITMO University for quantum communication systems are presented in the article. For the first time in national practice, original technologies for the formation of optical waveguides by the method of thermal diffusion of titanium ions on crystalline substrates of X- and Z‑cuts of lithium niobate and the formation of microwave traveling wave electrodes based on galvanic silver with subsequent gilding were used to manufacture prototypes of modulators. The assessment of the main operational characteristics of the modulators is carried out. The influence of the housing design and the quality of assembly of modulators on their main parameters is revealed.
Tags:   microwave integrated optical modulators   modulator performance characteristics   quantum communications   quantum key distribution   квантовая рассылка ключа   квантовые коммуникации   свч интегрально-­оптические модуляторы   эксплуатационные характеристики модуляторов
Free-Space Optical Communication
M. Yu. Kernosov, S. N. Kuznetsov, B. I. Ognev, A. A. Parshin
Reduction of the Level of Errors in the Transmission of High-­Frequency Optical Signals in a Turbulent Atmosphere Due to the Use of Statistics of the Received Signal Level DOI: 10.22184/1993-7296.FRos.2020.14.5.424.436

Analysis of the distribution probability of the received signal in a wireless optical communication line under various conditions shows a significant dependence of the error level in the communication channel on the level of power stabilization at the receiver. The significant difference between the statistics of the received signal level and the known distributions does not allow using them to approximate the probabilities of large deviations of the signal level from the mean value. An algorithm for evaluating the optimality and adjusting the level of stabilization of the receiving power based on the distribution statistics is proposed. According to experimental data, the proposed algorithm significantly reduces the level of errors in the atmospheric communication channel.
Tags:   atmospheric optical communication lines   errors in a wireless communication channel   free-space optics   laser communication terminal   power stabilization at an optical receiver   wireless optical communications   атмосферные оптические линии связи   беспроводные оптические коммуникации   ошибки в беспроводном канале связи   стабилизация мощности на оптическом приемнике
Biophotonics
V. N. Zelenkov, V. V. Latushkin, M. I. Ivanova, A. A. Lapin, V. V. Karpachev, A. A. Kosobryukhov, P. A. Vernik, S. V. Gavrilov
Effect of Pulsed Illumination on the Germination of Seeds of Some Vegetable, Oil-­Bearing and Medicinal Plants DOI: 10.22184/1993-7296.FRos.2020.14.5.442.460

The results of a comprehensive study of the effect of pulsed light irradiation on seed germination, plant growth and green mass yield are presented. The objects of research included 8 vegetable, medicinal and oil-bearing plants. A hypothesis was put forward that it is necessary to develop differentiated modes of light irradiation of plants (repetition period and pulse duration). It has been found that the effect of pulsed irradiation largely depends on the genetic characteristics of the objects. The most favorable and worst irradiation regimes were found in comparison with dark germination for plant productivity. Chlorophyll fluorescence parameters differ when exposed to pulsed light in the second and millisecond ranges. Analysis of the total antioxidant activity (TAOA) of green mass (microgreens) also showed significant differences depending on the genetic nature of the plant.
Tags:   chlorophyll   fluorescence   green photonics   growth and development   leds   medicinal plants   oilseeds   pulsed light   seeds   vegetables   импульсный свет   лекарственные растения   масличные культуры   овощные культуры   рост и развитие   светодиоды   семена   фитофотоника   флуоресценция   хлорофилл
News
Photonic and Quantum Technologies at the Military-­Technical Forum “Army 2020” From 23 to 29 August, the International Military-Technical Forum "Army-2020" was held in the Patriot Park near Moscow (Kubinka, Moscow Region). The exhibition accompanying the forum reflected the prospects for the development of special equipment and revealed the potential for investment. The development of technologies and state policy in the field of state defense orders, changes in the demands of consumers of military products and trade wars change the balance of supply and demand for the main types of products for the defense industry. The exposition demonstrated the ongoing changes in the structure of the military equipment market.

The innovatively active companies exhibiting their products varied in size. Along with vertically integrated companies, the forum was attended by medium-sized companies with competent business. This reflects the assumption that the monopoly position of super-large companies is being replaced by medium-sized companies that create subsystems and equipment for military equipment modules. The transition to modular systems is fraught with great competitive advantages. It makes it easier to connect systems and components manufactured in different geographic locations and allows for rapid technology changes.
Разработка: студия Green Art