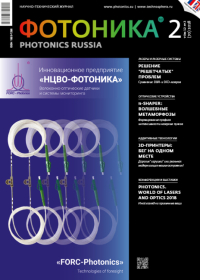 DFB lasers and DBR lasers share many of the same characteristics of narrow linewidth and tunability. Whereas the DBR is fabricated on single growth epi, the DFB requires that the grating be buried under a high index layer, epitaxially regrown over the grating, inorder to form the waveguide. This fabrication difference leads to critical distinctions between the operational characteristics of these two architectures.

Issue #2/2018 J. E. Spencer, P. Young
Contrasting the photodigm DBR laser diode architecture with competing DFB designs
DFB lasers and DBR lasers share many of the same characteristics of narrow linewidth and tunability. Whereas the DBR is fabricated on single growth epi, the DFB requires that the grating be buried under a high index layer, epitaxially regrown over the grating, inorder to form the waveguide. This fabrication difference leads to critical distinctions between the operational characteristics of these two architectures.
Теги:   dbr lasers   dbr-лазеры   dfb lasers   dfb-лазеры   fbg-technologies   fbg-технологии
BACKGROUND
The Photodigm family of high-power edge-emitting Distributed Bragg Reflector (DBR) laser diodes are based on Photodigm’s proprietary single epi growth, DBR laser architecture. The Photodigm DBR laser architecture consists of a gain region and a separate DBR grating region, monolithically fabricated over a continuous ridge waveguide, as shown in Figure 1. With this design, Photodigm has produced the world’s highest power commercially available, single-frequency, monolithic laser diodes for instrumentation, metrology, and spectroscopy in the wavelength region 740 to 1083 nm. Over the years, Photodigm DBR lasers have proven themselves to be ideally suited for applications requiring high-power single-frequency performance within a well-defined operating range. Photodigm has worked with its customers to develop a family of products unmatched in the industry, optimized for stability, reliability, and power for precision applications in spectroscopy, atomic physics, non-linear optics, and fiber amplifiers.

DBR lasers were among the first single frequency lasers, with development beginning in the 1970’s. They were commercially produced by SDL in the 1990’s for research applications requiring resonance with atomic transitions at 780, 852, and 1083 nm. The telecom boom in the late 1990’s to early 2000’s forced laser manufacturers to focus their capacity to meet the explosive demand in telecom applications. The needs of low power signal lasers for wavelength division multiplexing were best met by distributed feedback lasers, and DBR lasers for instrumentation and metrology disappeared from the market by the early 2000’s. Furthermore the 1300 and 1550 nm lasers required for telecom were produced from InP, which has a favorable processing chemistry for DFB fabrication.
Several manufacturers stepped in to fill the SDL void by 2002, using the DFB architecture so successful in telecom. Characteristic of DFB lasers, these devices had relatively low power. Characteristic of AlGaAs lasers, they had a difficult processing chemistry, and they experienced poor reliability when operated at the higher power required in instrumentation.
Photodigm introduced its product line based on its single epi growth DBR architecture in 2007, directly competing with DFB lasers in the 780 to 1083 nm band. The goal of this new product was to offer a product that could operate at higher power and with better reliability than the DFB, while at the same time offering a production pathway that offered improved manufacturing scalability though single growth epi. Photodigm’s DBR lasers offered a distinct technology choice for users of instrumentation lasers in the near IR band. Users soon came to value the higher performance and better reliability of the DBR laser over the DFB laser, with the result that Photodigm DBR lasers are now recognized as the standard of performance for applications such as atom trapping, metrology, and instrumentation, which require high power, narrow linewidth, high reliability, and the ability to lock and remain locked to a specific frequency.
THE PHOTODIGM DBR LASER
The Photodigm DBR laser starts on a GaAs wafer with multiple epitaxial layers grown in a single growth. Photodigm engineers design the epi using proprietary software and backed by many years of laser design experience. The epi consist of one or more high refractive index quantum wells surrounded by low index cladding layers that will form a waveguide. Following the precision growth of the epi, the laser structure is fabricated with surface features that define a monolithic, single mode index-guided ridge waveguide that runs the entire length of the device. The laser resonator consists of an electrically pumped gain ridge region and a passive DBR ridge region. The gain ridge is designed and etched to a precise depth to operate in a single spatial lasing mode by current injection into the quantum well. The separate DBR region is a wavelength selective Bragg mirror that provides feedback within a narrow spectral bandwidth. By overlapping the reflectivity of the DBR with the gain bandwidth of the epi, the DBR mirror will select the single longitudinal mode with the highest gain, producing a highly stable beam at a precise wavelength. The resonant cavity is defined by the highly reflective DBR mirror on one end, and a cleaved exit facet passivated and anti-reflectivity (AR) coated on the other end. The AR coated exit facet serves as the outcoupler for the diffraction-limited beam.

A characteristic of this design is the surface grating, which is etched into the semiconductor cladding layer above the quantum wells in the passive region of the ridge waveguide. However, the waveguide mode is strongly coupled to the DBR. The mode is periodically reflected at the resonant wavelength of the grating. Longitudinal modes not resonant with the DBR do not experience feedback and are lost. A DBR mirror consists of alternating layers of high and low index materials. In an etched DBR, the grating teeth are the high index material, and the low index grating spaces are filled with low index dielectric. The Photodigm DBR may have as many as 2000 grating teeth over a 500 micron long DBR mirror. The high index contrast of the grating structure results in a resonant reflectivity of the Bragg mirror that can exceed 90%.
THE DFB LASER
A competing architecture exists to produce a single frequency laser diode, known as the distributed feedback, or DFB, laser. DFB lasers and DBR lasers share many of the same characteristics of narrow linewidth and tunability. Whereas DBRs have a Bragg reflector separated from the gain region, DFB lasers have a feedback structure consisting of a low-contrast, weakly reflecting Bragg reflector distributed along the entire length of the gain ridge, hence the name distributed feedback laser. Whereas the DBR is fabricated on single growth epi, the DFB requires that the grating be buried under a high index layer, epitaxially regrown over the grating, in order to form the waveguide. See Figure 3. This fabrication difference leads to critical distinctions between the operational characteristics of these two architectures.

The DFB epi begins as a high index quantum well structure between two low index cladding layers. The gain ridge is fabricated all along the length of the laser structure by etching the upper cladding. The grating region is similarly fabricated along the entire length of the gain region. In order to confine the mode and produce the desired feedback response of the grating, a lower index cladding layer must be epitaxially regrown over etched cladding layer. Also regrown is a highly doped cap layer for current injection. The characteristic of the DFB is the buried grating.
Because the DFB laser is designed to experience feedback all along the gain ridge, no end mirrors are needed. However, in the perfectly symmetric case, opposing reflections at the Bragg wavelength are anti-resonant, or destructive, and lasing does not occur at the Bragg wavelength. However two modes equally spaced and around the Bragg wavelength are produced, the difference between the two modes being known as the stop band. To achieve single longitudinal mode performance, the laser is fabricated to destroy symmetry. This is typically done by having an anti-reflective coating on one end, which favors one mode over the other, and the laser operates on the favored mode.

THE DIFFERENCES BETWEEN DBR LASERS AND DFB LASERS
The distinguishing difference between the two architectures is the location of the grating within the epitaxial structure. The DBR uses a high index contrast, high reflectivity surface grating. The DFB uses a low index contrast, low reflectivity buried grating. Both architectures begin with carefully designed epitaxial wafers. Both rely on sophisticated semiconductor fabrication techniques of etching, lithography, and chemical vapor deposition. However, following the precise fabrication of the ridge waveguide and grating structure, the DFB must undergo a further epitaxial regrowth step to produce the low index contrast distributed feedback grating prior to metallization. By contrast, the DBR is finished with a simple CVD dielectric to encapsulate the device and prepare it for metallization.