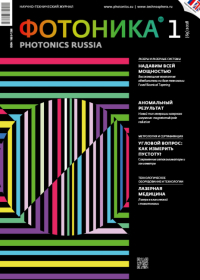 The revue of author’s articles on investigation of speckle fields phenomena and their coherent interaction processes that form physical basis of holographic and speckle interferometry. The phenomena appearing in the case of speckle-modulated fields superposition are analyzing, interpreting and summarized from common point of view as in interference experiments, so in realization of the practical possibilities of speckle optics methods.

Issue #1/2018 I. S. Klimenko
Interference of speckle fields
The revue of author’s articles on investigation of speckle fields phenomena and their coherent interaction processes that form physical basis of holographic and speckle interferometry. The phenomena appearing in the case of speckle-modulated fields superposition are analyzing, interpreting and summarized from common point of view as in interference experiments, so in realization of the practical possibilities of speckle optics methods.
Теги:   coherence   diffraction   hologram   interference   speckle field   superposition   голограмма   дифракция   интерференция   когерентность суперпозиция   спекл-поле
INTRODUCTION
The principle of holography was discovered by D. Gabor in 1947 [1] even before the invention of the laser. Later, in 1962, it was generalized by Y. N. Denisyuk as a phenomenon of mapping the optical properties of an object in the wave field of the scattered radiation [2]. The use of Helium-Neon laser [3] by E. Leith and J. Upatnieks in 1963 made it possible to fully demonstrate the remarkable properties of holographic images. Literally, optical holography began to develop rapidly immediately after this.

However, there was also a problem that has a fundamental basis – there always appeared the so-called laser spotting in the images. This unremovable noise was called speckle noise ("speckle" – grain, spot). The studies have shown that such noise is caused by the use of diffusely scattered coherent radiation. The reason for the the appearance of the speckle structure is the inevitable spatial modulation of the light fields due to the cross-interference of a set of radiation components. The traditional method of holography is based on recording the light field scattered by the object in the presence of an oblique (off-axis) reference wave. When the diffraction is restored at the zero maximum, a diffusely scattered background arises as a consequence of the diffraction of the illuminating beam on the speckle structure registered by the hologram. For some time, it was believed that this component of the field diffracted on the hologram did not carry useful information.
However, as the studies in the field of holography of focused images have shown [4, 5], the outwardly chaotic structure of the speckle field is capable of carrying essential information about the investigated objects. In [6, 7], the different groups of researchers, independently of each other, revealed the effect of the formation of focused images of axial reconstructions by holograms obtained in diffusely scattered radiation. The reconstructed images had a number of curious properties. An important consequence of the applicability of holographic recording of the focused images of reference waves of arbitrary shape, including those diffusely scattered [8–10], in particular formed from the radiation scattered by the object [11], was the possibility of a peculiar degeneration of the reference wave. Its meaning lies in the fact that in diffuse-scattered coherent radiation, the focused images are recorded without a specially formed reference beam. The nature of such images, independent of the presence of a reference wave, was subsequently investigated and explained in [12, 13].
The result of the components interference of the diffusely scattered field (speckle structure) registered by the receiver is a low-frequency spatial carrier wave. It is necessary for the formation near the axis of the illuminating beam of the images found in [6, 7] and constituting the physical mechanism of speckle photography and speckle interferometry.
SPECKLE FIELD PHENOMENON
The practical use of laser radiation is accompanied by the formation of light fields that have a complex random spatial structure. Such fields, i. e. speckle fields, spontaneously arise when coherent radiation is scattered by any rough or essentially uneven surfaces, and also objects with an irregular amplitude or phase profile. Therefore, only specular reflection and transmission of laser radiation through objects that are uniformly transparent are not accompanied by the formation of speckle fields.