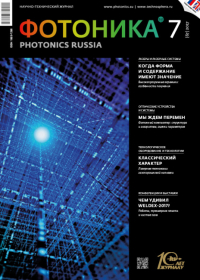 Issue #7/2017 V.N.Gavrilov, Yu.M.Gryaznov, A.V.Malakhov, P.D.Moiseev, D.A.Sinev, A.A.Chastov
Automated System for Parameters Control of Optoelectronic Components
The article presents a new automated monitoring system for the parameters of optoelectronic components. The automated system consists of both newly and serially developed instruments. Technical characteristics of devices and structural diagrams of parameters measurements for optoelectronic components are presented.
Теги:   control of optoelectronic components   fiber optic data transmission systems   волоконно-оптические системы передачи данных   контроль оптоэлектронных компонентов
Light-emitting and photo-integrated structures, as well as modules and nodes based on them, are used as the principal components in the creation of the fiber-optic transmission systems (FOTS). Thus the development of controls for the fiber-optic node and module parameters is caused by the need to solve measuring tasks in the following areas:
• control of LED, solid-state laser, radiating module parameters during the production phase and during operation,
• control of photoelectric receiver and receiving module parameters during development and production.
Automated control system will reduce the complexity of control operations and improve the stability of the produced component parameters for the FOTS.
The developed in JSC "Federal Research and Production Center" A. P. Gorshkov Research and Instrumentation Engineering Institution of Nizhny Novgorod "Quartz" automated control system of the fiber-optic node and module parameters is described below.
The automated system is designed to measure the following parameters of light-emitting and photo-integrated structures: • power and wavelength of light-emitting structures;
• ampere-watt sensitivity of photo-integrated structures;
• spectrum characteristics of light-emitting and photo-integrated structures;
• absolute and relative emitting power levels.
The automated system consists of newly developed devices: a fiber-optic emitting source, a fiber-optic power meter, a fiber-optic attenuator, a mounting receiver, which is part of a unit for spectrometric measurements. The devices are made in the form of a 415 Ч 213 Ч 129 mm structural element for installation in a 19 inches rack. Devices can also be supplied in a standard Schroff Propac PRO package. For example: a fiber-optic emitting source and a power meter, or an emitting source and a fiber-optic attenuator, etc. Exterior appearance of the devices in the Propac PRO package is shown in Fig. 1.
The automated control system also includes series-produced devices: a monochromator MDR‑204, a DC power supply, a photodiode amplifier F57–601 and a PC. Exterior appearance of the automated control system for fiber-optic node and module parameters in full is shown in Fig. 2.
The automated system meets the requirements of GOST 22261 in terms of metrological characteristics, hardness, strength and resistance to mechanical and climatic effects satisfies the requirements of group 3 of GOST 22261.
The basis of the fiber-optic emitting source are solid-state lasers operating at wavelengths of 0.85; 1.31; 1.55; 1.62 µm. Lasers have a strong dependence of the power level and emission wavelength on the ambient temperature and laser temperature. Therefore, a solid-state optical module (DOM) is used as the transmitting source, containing a laser located on a solid-state cooler, which, together with a temperature gage (thermal resistor), is included in the thermal stabilization circuit as an actuating and sensing elements.
The sensing element of the emission power equalizing circuit is a photodiode. The signal from the photodiode is fed to the operational amplifier, compared with the reference DC voltage. The error signal is amplified, integrated and then fed to a controlled current source of the laser pumping. When the pumping current is changed, the laser is submitted to the operating point, and the operational conditions control is performed.
It is possible to modulate the output radiation from an internal generator with a frequency of 270 Hz, which is accomplished by changing the current of the laser pumping. With that the current of the laser pumping is composed of two components (constant and variable), the values of which depend on the control voltage values supplied to the transistor bases of the current generators.
Operating principle of the fiber-optic power meter is based on energy conversion of a visual signal into an electric current using a photodiode. At the power meter inputs there are specially designed fiber optical connectors allowing connection of both multimode and single-mode fiber optic cables. The lenses placed in the connectors form a parallel beam necessary for the operation of optical nodes and device modules.
To increase the accuracy of power measurement in the meter, it is possible to automatically determine the central emission wavelength. The measurement is carried out using a dispersive element, spectrum absorption characteristic of which is monotonic and has a high transconductance within the operating range. The principle of measuring the wavelength in this way is as follows [1].
Photoelectric receiver’s response to the radiation effect with a radiation power distribution along the wavelength P (λ) in the wavelength range Δλ is given by:
, (1)
where
I1 is the photoelectric receiver current,
S(λ) is the spectrum response of the photoelectric receiver,
α is the ampere-watt characteristic of the photoelectric receiver.


The experimentally measured I2/I1 dependence on the emission wavelength when calibrating is recorded in the processor memory and the central wavelength of the analyzed emission is determined by two power measurements.
When calibrating, the spectral dependence of the photodiode sensitivity is measured, by which the factors inversely proportional to the photodiode sensitivity at each wavelength are calculated. When measuring the emitting power from the measured central emission wavelength, a factor corresponding to this wavelength is derived from the processor memory and the result of the emitting power measurement is given with its account. Thus, the spectral response of the power meter becomes independent of the wavelength.
In each optical channel, three independently controlled switches are placed in front of the photodiodes, which, upon command, introduce a damper made of light resistant material, an optical attenuator with attenuation of 20 dB, or a dispersive element periodically switched on in the wavelength measurement mode into the optical beam.
Introduction to the optical wavelength path of the attenuator extends the linearity range of the photoelectric receiver, which uses a special photodiode located on a semiconductor thermoelement, which allows stabilizing the temperature.
The presence of a damper blocking an optical channel is necessary both during calibration of the device and during operation in the "zero setting" mode. It is provided that this mode can be entered both by the operator’s command and automatically – after a preset period of time.
As a photoelectric receiver, a photodiode based on InGaAs structures is used, the photosensitive element of which is located on a semiconductor micro-cooler, which stabilizing the temperature. The current of the photoelectric receivers is converted into a voltage and then fed to the programmed amplifier input. The programmed amplifier allows changing the transmission ratio of the amplifier in accordance with the level of the optical signal supplied power. Next, the voltage is supplied to the input of a 14-bit AD converter, converted to a binary code and processed by a microcontroller.
Parameters of the emitting and photo-integrated structure analysis must be carried out in a wide dynamic range of emitting powers, which is achieved by using a fiber optic attenuator.
The attenuation of optical emission is implemented in the device by using absorbing metal films deposited on optical glass substrates. This method provides the most stable rates and is more sophisticated for obtaining the specified attenuation values ​​with great accuracy. The required attenuation is achieved by introducing parallel rays of discrete attenuators set into the beam. The precise value of the attenuation to be adjusted is achieved by introducing a variable attenuator whose attenuation varies with the disk angular rotation located in the path of the light beam with an absorber deposited on it.
With the inclusion of n discrete and variable attenuators, an absolute attenuation value is determined in accordance with the formula [2]:
, (5)
where
kλ0 is the absorption factor of the film at the wavelength of the calibration λ0,
L is the thickness of the absorber,
α is the angular rotation of the variable attenuator,
f(α) is the dependence function of a film thickness on the angular rotation,
ρ(α, λ) is the attenuation factor determined by reflection on the surface with an absorber deposited on it.

Then the spectral response of the photo-integrated module will be written as follows:
SФМ, λ = SОП, λ · IФМ, λ / IОП, λ. (8)
As a result of measurements in the dialog box of the program, along with a graphic representation of the reference receiver response in a given wavelength range, the spectral dependence of the photo-integrated module response and their entry table will be displayed.
The ampere-watt response of the photo-integrated modules is measured by measuring the emitting power, impinged on the modules, and current using a photodiode amplifier.
To determine the ampere-wattage of the analyzed photo-integrated structure, limit values of the emitting power and the attenuation step must be included into the measurement program.
To determine spectral response, the spectral measurement range (λmax, λmin) and the motion step along the spectrum is set.
Upon completion of the measurements cycle of the photodiode ampere-watt characteristic and the spectral response, a protocol is generated based on the measurement results of the photodiode parameters.
Parameters and characteristics of the automated control system are determined by the parameters and characteristics of its component parts and correspond to:
• for the meter of the emitting module parameters:
• range of measured values ​of average power 10–9 – 10–1 W;
• the basic relative error of average power measurement at calibration wavelengths within ± 5%;
• emission wavelengths 0,85–1,65 mkm;
• absolute measurement error of wavelengths not more than 5 nm.
for the meter of the photo-integrated module parameters:
• ampere wattage response, A / W 0,05–1;
• spectral response:
• wavelength range, mkm 0,60–1,65;
• measurement error,%, not more than ± 4.
Engineering solutions used in automated control system of the fiber-optic node and module parameters, and the presence of three USB, RS232, GPIB interfaces in each device ensure easy connection, both of the entire automated system and individual devices included in it, to a personal computer. The software package allows performing testing automation, report preparation and, at the same time, ensuring the maximum performance efficiency when measuring the fiber-optic node and module parameters.
Photonics Russia. Issue #7/2017
Readers feedback
Leave a feedback