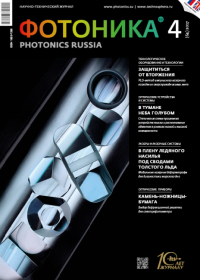 A method for measuring low concentrations of nitric oxide using a fiber-optic interferometric detector is suggested in the article. In order to increase detection sensitivity, the surface area contacting with the gas is increased using nanoporous Al2O3 and introducing hybrid nanoparticles into its pores.

Issue #4/2017 M.A.Kazaryan, V.I.Krasovsky, I.N.Feofanov, D.M.Krichevsky, I.G.Likhachev, A.V.Kulikovskiy, R.A.Zakharyan, V.I.Pustovoi, A.V.Zasedatelev
NO2 Fiber-Optic Detector
A method for measuring low concentrations of nitric oxide using a fiber-optic interferometric detector is suggested in the article. In order to increase detection sensitivity, the surface area contacting with the gas is increased using nanoporous Al2O3 and introducing hybrid nanoparticles into its pores.
Теги:   fiber-optic detector   hybrid nanoparticles   measuring low concentrations of nitric oxide   nanoporous al2o3   гибридные наночастицы   измерение малых концентраций окиси азота   нанопористый al2o3   оптоволоконный датчик
T
he possibility of measuring small concentrations of nitric oxide using a fiber-optic interferometric detector was demonstrated. 2(3), 9(10), 16(17), 23(24)-tetra-tert-butyl phthalocyanine chloraluminum (AlPc) was used as a sensitive compound, which structural scheme is shown in Fig. 1.
The sensitivity to nitrogen dioxide is usually associated with the fact that a molecule of NO2 in a system is attached to the central atom of phthalocyanine metal (Fig. 2). As a result, the negative charge transfers to NO2, thus resulting in a change in the electronic levels, and the corresponding appearance of a new band in the absorption spectrum [1]. Introduction of gold nanoparticles having plasmon resonance to the system leads to an increase in sensitivity due to the fact that phthalocyanine molecules are in an amplified local field [2].
Langmuir AlPc films were used in [4,5] to create sensitive detector elements. Based on the conclusions, it follows that the detector sensitivity is not increased with increasing film thickness. Thus, in order to increase the sensitivity, it is necessary to increase the area of ​​the surface contacting the gas. The idea of ​​this work was to significantly increase the surface area by using nanoporous Al2O3 and introducing hybrid nanoparticles into the pores.
Hybrid nanoparticles were synthesized in the Laboratory of Organic Synthesis of the Chemical Faculty of M. Lomonosov Moscow State University [3,4]. They were gold nanoparticles (produced by Sigma-Aldrich) with an average diameter of 20 nm, with Al-Pc coating with a thickness of about 2.5 nm. TEM image (Fig. 3).
The sensing element was a plate of porous Al2O3, made by electrochemical etching in an electrolyte based on sulfuric acid, with an average pore diameter of about 50 nm (Fig. 4). The introduction of nanoparticles was carried out by impregnating a plate of porous Al2O3 with a colloidal solution of nanoparticles in toluene, followed by drying.
The operational principle of the detector consisted in the Fourier analysis of reflection spectrum of LED light from the detector element, represented by three Fabry-Perot interferometers, reflecting radiation of a broadband source (LED). Approximation of the spectrum has made it possible to detect the change in the effective refractive index of the working layer with a high accuracy (up to 10–6), and take into account the temperature effect [6].
The general scheme of the measuring system [4] is shown in Fig. 5. The source of radiation was a light-emitting diode with a single-mode fiber-optic output. To introduce the radiation into the spectrometer, Y-splitter was used. The reflection spectrum was recorded using a fiber-optic mini spectrometer. Nitrogen dioxide was prepared using a standard copper titration reaction with concentrated nitric acid. The sensing element was placed in a chamber with a gas flow. The sensitivity of the measurements was about 10–12.
Analysis of the absorption spectra (Fig. 6) showed that due to the exciton-plasmon interaction, 8-fold increase in the detector sensitivity can be achieved at wavelengths of 513 nm and 532 nm (Fig. 7). The wavelength of 532 nm is convenient for the design of industrial samples, since it coincides with the wavelength of the radiation of commonly applied Nd: YAG lasers with doubled frequency. In our case, the effective area of ​​the detector was 0.6 m2, which can increase the sensitivity by 3–4 orders of magnitude, in comparison with the scheme proposed in [5].
A detailed sensitivity analysis can be performed using theoretical model based on the modified Mie theory for coated metal particles and the theory of effective media in the form of Maxwell-Garnett relations.