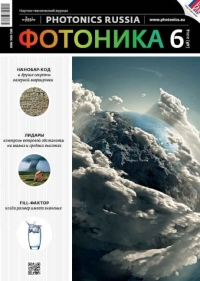 Pyrometric measurements metrology of real-world objects temperature, for example, in metallurgy are still not error-free. Ultimately, these errors can cause great industrial disasters. Analysis of the energy pyrometry method metrological challenges is given in the article.

Issue #6/2014 A. Frunze
Energy Pyrometry Metrological Challenges
Pyrometric measurements metrology of real-world objects temperature, for example, in metallurgy are still not error-free. Ultimately, these errors can cause great industrial disasters. Analysis of the energy pyrometry method metrological challenges is given in the article.
Теги:   objects spectrographic radiation efficiency   pyrometry   temperature measurement   измерение температур   пирометрия   спектральная излучательная способность
Multiplicity of the values of radiation coefficient for energy pyrometers due to the dependence of spectral radiation capacity on object temperature

As it is known from the papers [4, 5], often the spectral radiation capacity of object is the function of temperature. The dependence diagrams are given in Fig. 4 for dynamo steel upon the heating in nitrogen-hydrogen atmosphere for the temperatures of 427, 527, 627, 727, 827 and 927 ˚С [2]. It is obvious that the radiation coefficient estimated for the pyrometer, for example, with the spectral characteristic for 927 ˚С differs from the radiation coefficient for 427 ˚С almost by two times.

Also, described temperature dependence of the radiation capacity results in the occurrence of additional systematic method error of measurements at the expense of inaccurate entry of radiation coefficient. In order to evaluate this error let us assume that we found the accurate value of radiation coefficient for brightness pyrometer at the temperature of object for Fig. 4 equal to 627 ˚С and entered it to the pyrometer. So what value will the object measurement error have at the temperatures of 427 ˚С and 927 ˚С?

It should be noted that for the partial radiation pyrometers with broadband detectors the correlation (1) is not applicable. One of the variants of possible calculation of obtained additional method error is described in the paper [7] as follows. At first, the pyrometer calibration characteristic is calculated:

where and are the lower and upper limits of the spectral sensitivity of the relevant detector respectively, refers to the Planckian function, is the spectral characteristic of detector sensitivity, α is the dimension proportionality factor. Afterwards, the function which is inverse to the calibration function is estimated . The error of radiation coefficient entry causes the change of the signal on the detector output from to which with the help of the function inverse to the calibration function are recalculated to the temperature values of and . Calculations performed for the pyrometer with the characteristic showed that if user chooses the value of radiation coefficient for the temperature 727 ˚С using the "adjustment method" or any other method and the pyrometer measures our object at such temperature with the minimum error, than upon the measurement of 427-degrees object with this chosen value of the radiation coefficient result will be understated by 19.7% and upon the measurement of 927-degrees object – overstated by 18%!

Thus, at the expense of the temperature dependence of radiation capacity of measured object even upon the correct radiation coefficient entered to the pyrometer for certain temperature, additional method error can reach 20% when taking other temperatures. But the way how the spectral radiation capacity of dynamo steel (object from Fig. 4) behaves with the change of temperature and we know and can take it into account somehow thank to the paper [2]. And if it refers to the material on which there is no similar information, we cannot say anything about the value of this additional error. And actual measurement error can be not by times but by order-order and half higher than the instrument error of pyrometer (today these errors are 0.2-0.3% to 1-2%).

In other words, when taking the object temperature using the energy pyrometer practically always there is probability of occurrence of the unsuspected additional error with indeterminate value caused by the errors in the choice of radiation coefficient.

And this is the main point of the second serious metrological problem connected with the use of the values of radiation coefficients taken from the literature and reference materials. It is also ignored by metrologists and pyrometry specialists, knowingly or unknowingly.

In other words, even if the radiation coefficient was selected correctly taking into account the material spectral radiation capacity and pyrometer spectral characteristics, in the vast majority of cases the value of error of this coefficient estimation does not exist. As a result, both mentioned reasons make the error of temperature measurement by energy pyrometer indeterminate and in many cases this error can be great, to tens of percent.

Thus, in order to meet the requirements of modern metrology, pyrometry faces the task to learn how to estimate the value of the radiation coefficient ε which is metrologically significant for any object the temperature measurement of which can be needed and for any pyrometer offered at the market.

Therefore, in order to obtain the values of the radiation coefficients ε of measured objects which can ensure the metrological dependence of the obtained result of measured temperature the development of new methods is required.

Mathematical correlation for the estimation of the radiation coefficient ε

Let us return to Figures 1 and 2. It is not difficult to show that the value of radiation coefficient which must be entered to pyrometer for the correct measurement of the temperature of such "non-gray object" can be estimated on the basis of the following correlation:


where is the spectral radiation capacity of measured object (in this case from Fig. 1), is the spectral characteristic of sensitivity of the specific detector (in the case under consideration – , or from Fig. 2), refers to the Planck function.

Calculations performed in accordance with the formula (2) for the temperature of 1000 ˚С as well as for specified in Fig. 1, and , and (Fig. 2) yield the following results:

The fact that the traceability chain to the primary standard of temperature unit is broken in energy pyrometers during the temperature measurement of tangible objects, when the radiation coefficient entered to the pyrometer is different from 1, was described in the papers [6, 7]. This fact has not been realized by metrologists and pyrometry specialists to the full extent.

In order to understand the reason for it, it is necessary to take into account the following statement. Calibration and standardization of the pyrometers is accomplished at "black body" models (BBM) radiation capacity of which is usually different from 1 by fractions of one percent. Therefore, during the calibration and standardization the correction coefficient which is equal to 1 (or 0.99-0.999 which is the same in this case) is entered to energy pyrometer. In other words, the metrological characteristics of pyrometers and their basic error, primarily, are determined and confirmed by the unit correction coefficient entered to pyrometer.

The answer is as follows: it is impossible to find this interconnection using the calculation method. The error upon the correction coefficient which is different from 1 can be lower or greater than the error upon the unit correction coefficient, and it is impossible to say beforehand to what extent it is greater or lower; it is inadmissible from the point of view of metrology rules.

Why does it happen? The matter is that when pyrometer performs correction and there is number of operations in which manufacturers can make various mistakes and which will cause the occurrence of uncontrolled additional errors. Here are some possible mistakes.

1.Correction algorithms for brightness pyrometers and radiation pyrometers are known [7 correlations (1) and (2)]. Manufacturer can correct the brightness pyrometer using the correlation for radiation pyrometer and vice versa. It is common error. Its results are shown in the paper [7].
2.Further, both correlations are not applicable for the partial radiation pyrometers. They should be corrected using the value of flux which indirectly appears from the paper [8]. We do not know if the partial radiation pyrometer is corrected by the flux or on the basis of much simpler correlation for the total radiation pyrometer.
3.In the above-mentioned correlations temperature values must be in Kelvin for the correction. But the programmer might use the temperature values in Celsius degrees for the correction by mistake not converting them into Kelvin. In other words, the algorithm can be correct but it can be used with mistakes.
4.Finally, when implementing the algorithm, microprocessor might contain common programmer mistakes, for example, register overflow or underflow. Such mistakes are dangerous due to the fact that they do not affect one type of data files but they can cause noticeable errors in other data files. In this light, they are not always detected during the process of program testing and become apparent only at the stage of product use.
5.Different nonlinear effects in analog circuit engineering. Illustrative example of its possibility and evaluation of caused error is given in the paper [9].
Thus, there are several reasons which can result in uncontrolled growth of error upon the correction coefficient which is different from 1. It is possible to determine if the error has grown or not experimentally. But currently there are no equipment, measurement chains and methods for it; this fact indicates the breakdown of traceability chain for energy pyrometers when measuring the temperature of tangible objects.

Let us summarize the article. Up until now the metrology have been considering only questions in pyrometry connected with the formation of temperature standards, clarification of the temperatures of phase transitions selected as the reference temperatures, transfer of the size of unit from the primary standard to the working standards of lower grades, design and certification of the standard radiators and standard pyrometers, measurement chains, methods of verifications and calibrations. In other words, metrology has been serving only to the reference and standard area of pyrometry. At the same time, the metrology of pyrometric measurements of the temperature of tangible objects, which have the radiation capacity different from one, including "non-gray" objects is in embryonic state and in reality has not been developed. In this context, great amount of unsolved problems have accumulated in the practical pyrometry for the last 50 years. Measurement devices offered to the consumers have been characterized by the basic errors equal to fractions of one percent for more than ten years already but they measure the temperature with the error by order-order and half (!) higher than the assigned basic error. This fact is known to everybody and does not surprise anybody but nobody pays attention to the abnormality of this fact.

Metrological challenges of the rest of pyrometry methods as well as their possible solutions will be considered.
Photonics Russia. Issue #6/2014
Readers feedback
Leave a feedback