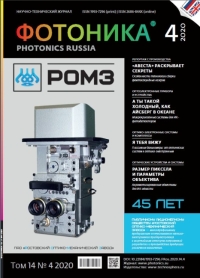 The article discusses the possibility of creating lighting mobile navigation systems that provide long-range drive of aircraft along the glide path. System base – ​monochrome LEDs of LLC SPCOD “OPTEL”. A new parameter was proposed for navigation issues – ​the distribution of illumination in a plane perpendicular to the optical axis of the LED. The parameter affects the overall dimensions and tactical and technical characteristics of the designed products.

LLC “Scientific and Production Enterprise” Aerooptika”, Ramenskoye, Moscow reg., Russia
The article discusses the possibility of creating lighting mobile navigation systems that provide long-range drive of aircraft along the glide path. System base – ​monochrome LEDs of LLC SPCOD “OPTEL”. A new parameter was proposed for navigation issues – ​the distribution of illumination in a plane perpendicular to the optical axis of the LED. The parameter affects the overall dimensions and tactical and technical characteristics of the designed products.

One of the priorities of this strategy will be the promotion of environmental technologies in transport, in particular, the revival and development of a network of aerodromes for small aircraft, as one of the most environmentally friendly modes of transport. The ongoing climate changes in the near future will make the Northern Sea Route safe and profitable for shippers, so the task of its aviation support is very important. This will require the restoration of the now abandoned airports, small runways and runways, especially in the North and the Far East. An additional incentive to this is the increased interest in the development of economic activity in the Arctic basin, since in the future up to 30 percent of all hydrocarbons will be produced in the Arctic.

Currently, the restoration and creation of a large number of new take-off and landing sites capable of accepting various types of aircraft of small and middle class has significant difficulties, including material ones, given the remoteness from the settlements and the difficulty of equipping such sites with a constantly operating expensive navigation infrastructure. In this case, the creation of inexpensive mobile lighting systems of long-distance drive, solving the problem of receiving the aircraft along the glide path, providing rapid deployment on the ground and having low power consumption (units of Watts for power from a portable battery), capable of working reliably in various climatic zones and providing safety during landing night and day in simple and difficult weather conditions.

The creation of such complexes is directly related to the use of small-­sized powerful light sources that are safe for visual observation, resistant to mechanical stress and temperature changes. Such a set of characteristics only have powerful super-­bright LEDs.

Currently, there is a wide variety of superbright LEDs on the lighting products market, therefore, to narrow the search area, only monochrome ones are considered that form the light flux in a cone with a full opening angle of no more than 40 ° to reduce the light intensity in half.
The world leaders in the lighting products market are foreign firms CREE, LUXEON, LUMILEDS, OSRAM, NICHIA, SEOUL, PHILIPS, etc. producing powerful LEDs and assemblies, both monochrome and white, the proportion of which is predominant, which explains the wide scope of their application for lighting purposes. The use of powerful monochrome LEDs is limited mainly by their use in architectural and advertising lighting [1–2].

The variety of applications for high-power LEDs has determined universality in the approach to their design – ​the LED module is composed of two parts: the LED itself or the assembly and located in the immediate vicinity of the secondary optical system that provides the collection and formation of the light flux. This universalism has many positive aspects, and at the same time, in the creation of such a highly specialized technique as the navigation system of the long-distance drive, a shortcoming of such a constructive solution of the LED module has been revealed.

The largest companies producing secondary optics are LEDIL, KHATOD, FRAEN, etc. Secondary optics, which are structurally produced by these companies, have much in common: their location is in the immediate vicinity of the light source and their shape is, in most cases, in the form of a cone-shaped figure with elements of a reflecting surface and, in some cases, a Fresnel lens at the end. With a high proportion of light flux interception (more than 75%), such secondary optics has quite significant transverse dimensions [3–8].

Domestic LEDs are considered on the example of products of LLC SPCOD “OPTEL”, Moscow. With a smaller volume of output compared to foreign manufacturers, the company has the opportunity to adapt the design directly of the LED housing for the specific task being solved, which ensures a smaller overall size of the lighting product.

Comparison of the output parameters of foreign monochrome LEDs with secondary optics and monochrome LEDs of LLC SPCOD “OPTEL” revealed that for foreign products due to the large dimensions of the cross section, the value of such an important parameter for building navigation systems as the distribution of illumination in the plane located behind the lens is reduced and perpendicular to the optical axis of the LED. Considering the fact that in a navigation complex the light source (with or without secondary optics) works in conjunction with remote optical systems, this parameter directly determines the dimensions of the product, which is especially important for creating small-­sized mobile navigation systems. A comparison of the LED parameters is illustrated in Fig. 1.

The analysis was carried out for single-chip high-power monochrome LEDs with secondary optics (foreign manufacturers) and similar in terms of power consumption and total opening angle of the generated luminous flux at a level of 0.5 of the maximum light intensity (Θ1 / 2) of monochrome domestic LEDs of LLC SPCOD “OPTEL” Moscow. The results revealed the superiority of domestic monochrome LEDs, which are 1.4 times superior to foreign samples in this parameter. Since this parameter is largely decisive, this allowed us to conclude that the use of monochrome high-power LEDs of LLC SPCOD “OPTEL” is optimal for creating small-­sized mobile lighting systems for long-distance drives that solve the problem of receiving an aircraft along a glide path.

STE “Aerooptics”, in accordance with the terms of reference for experimental design work approved by the director and coordinated with the head of the flight service of the FSUAE MES RF, developed the AERU.461523.002 Fig. 2 mobile glide slope beacon [2].

The selection of LEDs based on the parameter proposed above made it possible to maintain the following technical characteristics while maintaining the minimum mass and dimensional parameters of the beacon:

AERU.461523.002 mobile glide path beacon passed a flight test cycle conducted by the Emergencies Squadron at the aerodrome of the Flight Research Institute named after M. M. Gromova (Zhukovsky, Moscow region). The beacon in the expanded position is shown in Fig. 3.
The flights were carried out using a MI‑8 helicopter. Based on the results of flight tests, a positive conclusion was obtained.

Subsequently, the AERU.461523.002 mobile glide slope beacon was tested and tested at the Cheremshanka airfield in Krasnoyarsk. The operation was carried out by helicopter air squadron of the Sibaviatrans OJSC flight complex under conditions of a limited flight range in the aerodrome zone. According to the results of trial operation, a positive conclusion is obtained. The product is protected by a patent for an invention and has a certificate of conformity in the GOST R certification system.

Conclusions
The obtained results allow us to recommend the use of mobile glide path lighthouses developed on a domestic lighting technology element base for placement on any type of aerodromes, unequipped landing sites, landing platforms of drilling platforms in order to generate visually perceptible information about the glide path for reducing the aircraft to ensure a safe landing in simple and difficult weather conditions night and day. This seems to be very important in the development of the Arctic coast and the restoration of runways and landing strips and strips for small aircraft in Russia, as well as for emergency reception of aircraft during operations carried out in emergency situations.