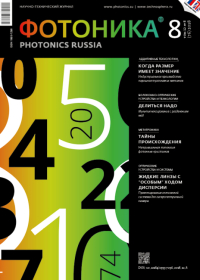 The hyperspectral remote sensing method allows detecting small objects, identifying their composition and observing their internal processes. The method has high sensitivity when working with objects that do not have the characteristic selected lines of the spectrum. A hyperspectral camera with a wide spectral range at five wavelengths is presented. The design is based on liquid optical materials with a "special" dispersion path for the superachromatic correction of chromatic aberrations.

Issue #8/2018 M.V.Agrinsky, A.V.Golitsin, V.V.Startsev
Designing an optical system for a hyperspectral camera applying optical fluids with a “special” dispersion path
The hyperspectral remote sensing method allows detecting small objects, identifying their composition and observing their internal processes. The method has high sensitivity when working with objects that do not have the characteristic selected lines of the spectrum. A hyperspectral camera with a wide spectral range at five wavelengths is presented. The design is based on liquid optical materials with a "special" dispersion path for the superachromatic correction of chromatic aberrations.

DOI: 10.22184/1993-7296.2018.12.8.794.800
Теги:   chromatic aberration   hyperspectral camera   liquid optical materials   optical lens   superachromatic correction   гиперспектральная аппаратура   жидкостные оптические материалы   оптические объективы   суперхроматическая коррекция   хроматическая аберрация
Hyperspectral instrumentation is designed to measure in a wide optical range of the spectrum and to obtain both the image and the spectral characteristics of the studied surface. Therefore, such equipment combines the parameters typical of both spectral instruments (spectral resolution) and image recording means (spatial resolution).
Measurements in the range from several hundred to thousands of spectral channels are referred to as the hyperspectral ones, and a device that simultaneously measures spectral and spatial coordinates is referred to as a hyperspectrometer.
Hyperspectral imaging is a method of acquiring and processing information from different parts of the electromagnetic spectrum. Each object has a unique spectral characteristic of radiation that allows you to uniquely identify the materials that make up its structure.
Hyperspectral sensors collect information in the form of "packets" of images (hyperspectral data), with each image representing a specific region of the electromagnetic spectrum (spectral channel).

Hyperspectral data allows you to work with an object that does not have the characteristic selected lines of the spectrum, and use the entire measured spectrum when processing them. This fact qualitatively distinguishes the hyperspectral remote sensing method from the multizone one.
The transition from traditional multispectral imaging to hyperspectral increases not only the amount of information, but also provides a completely new, unique, qualitative character of hyperspectral imagery data.
Identification of objects and materials in hyperspectral measurements is based on the ability of these probed objects to absorb and reflect light waves. The fundamental basis of the used method of remote sensing is a one-to-one correspondence between the recorded reflected optical signal and the elemental composition of the reflecting surface. Sunlight can be used to illuminate the surface of the Earth during the daytime. In this case, the maximum spectral density of the illumination radiation falls on the visible range.
The information characteristic of hyperspectral measurements is the intensity of the radiation reflected by a specific area on the surface of the Earth, depending on the value of the wavelength of the detected radiation λ.
The high sensitivity of the reflection coefficients of heterogeneous objects to the frequency and polarization of illuminating radiation highlights the hyperspectral method among other methods for studying the surface of the Earth. The data of hyperspectral measurements are used to solve complex problems of detecting small objects, to identify their composition and their internal processes, to highlight differences between very close classes of objects, estimate biochemical, geophysical and other parameters, etc. Only hyperspectral measurements can reveal small spectral differences between individual surface elements and serve as an indicator of objects and processes of interest on the Earth’s surface.
CALCULATION OF THE INPUT LENS WITH THE APPLICATION OF OPTICAL FLUIDS WITH A "SPECIAL" DISPERSION PATH
The imaging optical system of the hyperspectral camera operating in a wide range of the spectrum requires virtually diffraction aberration correction of both monochromatic and chromatic aberrations. Apochromatic or superachromatic correction of the latter is possible only when using optical materials with different dispersion paths. For the first time, practical implementation was carried out at the end of the 19th century by an optician Ernst Abbe using fluorite as an optical material with a different dispersion path. In the twentieth century, special crown glass (OK1, OK4) and special flint glass (OF4, OF6) were created in the optical industry, having analogues in the catalogs of foreign firms. However, a relatively small "peculiarity" of the above, mainly flint glasses, limited the spectral range of correction of aberrations, which prompted the search for non-glass optical materials, e. g., liquid optical media with a "special" dispersion path (OLM) [1–7]. The prerequisite was that the dispersion path depends on the composition of the substance and its concentration of chemical elements. It is very problematic to maintain the required concentration of the added chemical elements in high-temperature melt with the traditional technology of making glass, which led to a small amount of "peculiarity" in glasses. In the synthesis of liquid media that do not require high-temperature treatment, it is possible to achieve a significantly higher concentration of the required chemical elements, which was confirmed in practice. The use of OLM in lenses allows you to get apochromatic aberration correction in 1.5–2 times larger spectral range compared to glass analogues.

In the diagram comparing the relative partial dispersions and the Abbe numbers of optical materials, the vast majority of glasses are located near a straight line, referred to as the "normal straight line". To correct the secondary spectrum of the apochromat lens, at least one of the materials must have a special partial dispersion displacing the material on the diagram from the normal line.
For use as part of the hyperspectral camera, Sony ICX445AL CCD matrix is selected. The matrix has a working spectral range of 0.4–1 µm, the format is 1280 · 960 active elements located in 3.7 µm increments. The size of the diagonal of the photoreceiving zone is 6 mm. The maximum frame rate of the matrix is ​​22 Hz with a full frame, partial frame modes are possible with a frequency of up to 30 Hz. To fully use the spectral range of the matrix, the camera lens must have an image quality at the level of the diffraction limit in the range of 0.4–1 µm.
The spectral range of the optical system for a given image quality determines the number of corrected wavelengths. An illustration of the connection of the width of the working spectral range of the lens with the degree of correction of the chromatism of the position is shown in Fig. The world’s best samples of superachromat lenses are corrected at four wavelengths. The first description of the superapochromat was made in 1963 [6–8] and, up to the present time, there is no information about the lenses with a higher degree of correction of chromatic aberrations, or the possibility of creating those.
Liquid optical materials are involved for implementing the wide spectral range required for a hyperspectral camera at 5 wavelengths (colors), which was done for the first time and exceeds the achieved world level.
Liquids provide a greater range of dispersions of the refractive index and an order of magnitude greater than the partial dispersions, with some costs due to complication in construction and a higher temperature dependence on the refractive index.
The lens is implemented as two groups of three lenses each (Fig. 2). The first and third lenses in each group function as a shell forming a lens from optical fluid in the gap between them. The focal length of the lens is f’= 70 mm.
Liquid 296244 in the first lens group has a dispersion less than that of fluorite and any optical glass (νd ≈ 124), with a refractive index nd ≈ 1.3.
Liquid 458582 in the second group is identical in refractive index of the fused quartz with a slightly larger dispersion (νd ≈ 58), since the liquids on the Abbe diagram cannot be located in the regions occupied by glasses and crystals. For the purpose of calculating the lens in the Zemax program, the spectral refractive index of liquids is approximated by the Herzberger formula of the following form:
nλ = A + BL + CL2 + Dλ2 + Eλ4 + Fλ6
where L = 1 / (λ2–0.028).

The calculated results of the coefficients of the Herzberger formula for each optical liquid are given in the table. The glasses in each group are represented by a special crown and flint glasses. Set of glasses according to the Schott catalog, along the beam: SF59, LAKN13, SF59, LAFN23.
The combinations of materials found make it possible to keep the calculated chromatism of the position for the zonal beam (Py = 0.7) within 0.9 µm (Fig. 3). The chromatism curve of the position for the zonal beam (P = 0.7) crosses the zero position of the focal plane at 5 points, demonstrating a qualitatively new level of correction.
The calculated chromatism of the position for the pupil’s center and edge is within 1.8 µm (Fig. 4, 5) that, for a relative aperture of 1:5, provides a complete correction of the chromatism of the position compared to the diffraction limit (35 µm in the direction of the longitudinal defocusing) and the pitch of the elements of the photodetector matrix.
The calculated geometric spot of scattering of a point over the entire field does not exceed the diffraction limit of 4.3 µm (Fig. 6), while on the axis it is an order of magnitude smaller.Modulation transfer function is thus limited by the diffraction limit of the resolution (Fig. 7). The developed model does not use expensive optical crystals, in contrast to the known lenses – ​superapochromats.
CALCULATION OF THE OPTICAL SCHEME OF A SPECTRAL UNIT WITH A FLAT DIFFRACTION GRATING
The optical scheme for the formation of a hyperspectral image can consist of a collimating lens, in the focal plane of which a spectral slit is located, and which directs the beam of parallel rays being formed onto the spectrodynamic prism unit and the imaging lens forming the spectrum image in the plane of the radiation receiver.

Use of a flat diffraction grating as a spectral-dividing element in comparison with the prism block, is characterized by the absence of curvature of spectral lines, and the spectrum remains linear, which simplifies the image processing algorithm, increasing the efficiency and accuracy of obtaining hyperspectral data.
The optical scheme of the spectral unit with a flat diffraction grating is shown in Fig.8. Here, the role of the collimating and imaging lenses is performed by the same off-axis catadioptric lenses of the Maksutov-Newton type.
The calculated optical scheme fully implements the diffraction limit of resolution within the slit, matched with the photodetector region of the matrix by a projection system of a single magnification.
Photonics Russia. Issue #8/2018
Readers feedback
Leave a feedback