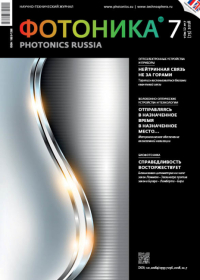 Issue #7/2018 A. A. Ryadun, M. I. Rakhmanova, V. A. Trifonov
Optical Properties of Li₂₋₂ₓMg₂₊ₓ (MoO₄)₃ Crystals Activated by Eu³⁺, Сu²⁺, Ti⁴⁺ Ions
The paper presents the results of study of crystals Li₂₋₂ₓZn₂₊ₓ (MoO₄)₃, doped with europium, copper and titanium ions. The photoluminescence spectra are recorded and the photoluminescence lifetimes are calculated. It is shown that the doping of Li₂₋₂ₓZn₂₊ₓ (MoO₄)₃ crystals with europium, copper, and titanium ions leads to an increase in the luminescence intensity with a maximum at a wavelength near 520nm. For Li₂₋₂ₓZn₂₊ₓ (MoO₄)₃: Eu crystals, a photoluminescence spectrum due to europium transitions was recorded and the corresponding lifetimes were calculated to be 0.57 and 3.4ms. Based on the analysis of the angular dependences of the EPR spectra of Li₂₋₂ₓZn₂₊ₓ (MoO₄)₃: Cu crystals, it was established that copper ions enter the structure in the Сu²⁺ state and occupy the position of magnesium with the formation of an oxygen vacancy to provide charge compensation. The parameters of the EPR spectra of copper ions are calculated.

DOI: 10.22184/1993-7296.2018.12.7.672.679
Теги:   crystals of double molybdate   epr   luminescence   scintillator   кристаллы двойного молибдата   люминесценция   сцинтиллятор   эпр
The development of modern solid-state physics, electronics, atomic physics, and many other branches of science and technology is unthinkable without the widespread use of single-crystal materials. Currently, methods have been developed for producing a variety of single crystals with parameters that meet the scientific and technical requirements. Nevertheless, science and technology continuously require the creation of new single-crystal materials with even higher characteristics or new combinations of physical and technical parameters. The crystals studied to date, used as lasers and scintillators, have several disadvantages. Therefore, the search for new laser and scintillation materials that meet modern requirements is relevant. The relevance of studies of the features of the transition metal ions into the structure of oxide crystals is also currently associated with the development of optical active media based on new types of oxide crystals doped with transition ions. Recently, the possibility of using tungstate and molybdate crystals as scintillation materials due to their chemical, thermal and radiation resistance and good processability has been actively studied. These crystals occupy a special place among promising scintillation materials due to the fact that these compounds allow solving the problem of double neutrinoless β-decay (0ν2β) detection [1]. Considerable interest in this problem is associated with the determination of the neutrino mass, and100Mo is one of the most promising nuclei for experiments on 2β-decay due to its high transition energy Q2β = 3035 keV [2]. Recently, double molybdate crystals Li2–2xZn2+x(MoO4)3 have been studied in detail [3–7]. The authors of [3] succeeded in growing the Li2–2xZn2+x(MoO4)3 crystals by the TSSG method (top-seeded solution growth) only centimeter in size, which is primarily associated with the selection of growing conditions. In [4–7], the Czochralski method under conditions of low temperature gradients (ΔT / Δx < 1 deg / cm) grown large (up to 100 mm) optically homogeneous Li2–2xZn2+x(MoO4)3 crystals, both undoped and doped with ions of the transition metals. The charge states and structural positions of the impurity ions are determined by the EPR method, and the parameters of the spin Hamiltonian are calculated. Furthermore, it was proved that low-temperature luminescence with a maximum near 560 nm is due to cationic vacancies, which provide charge compensation for impurity ions of transition metals.
It is of interest to investigate the growth and properties of other compounds, isostructural Li2–2xZn2+x(MoO4)3. This series includes Li2–2xMg2+x(MoO4)3: syngony – ​rhombic, space group – ​Pnma; Li2–2xMg2+x (MoO4)3 composition change area is 0≤x≤0.30. Lithium and magnesium ions are statistically located at positions M1, M2, and M3 of the crystal structure (Fig. 1) [8,9]. Melting point is 1030 °C (incongruent) [10]. The authors of [15] determined the charge state and the structural position of impurity copper ions. It was found that for a pure Li2–2xMg2+x (MoO4)3 crystal, luminescence is observed with a maximum at a wavelength of 520 nm, the intensity of which increases with decreasing temperature. It was established that doping of Li2–2xMg2+x (MoO4)3 crystals with copper ions leads to an increase in the luminescence intensity by 520 nm. It is assumed that cation vacancies are responsible for the luminescence, which provide charge compensation. Also, Li2–2xMg2+x (MoO4)3: Eu crystals were studied from the point of view of use as a scintillation bolometer. The light output of the scintillator is estimated as ≈ 1.3 keV  /  Me V. Li2–2xMg2(MoO4)3 scintillation bolometer showed excellent particle discrimination. These bolometric measurements showed that Li2–2xMg2(MoO4)3 is a potentially promising material for recording neutrinoless double β-decay, as well as for searching for other rare events [12].
In this work, the low-gradient Czochralski method has been used to grow optically homogeneous Li2–2xMg2+x(MoO4)3 crystals doped with europium, titanium and copper ions (Fig. 3, 4). Researches luminescent properties of undoped crystals grown previously [13] and europium-doped ions, copper and titanium are carried out.
EXPERIMENTAL PART
Double lithium-magnesium molybdate Li2–2xMg2+x(MoO4)3 crystals undoped and doped with Eu3+, Сu2+, Ti4+ ions were grown by Czochralski method in the conditions of low temperature gradients (ΔT / Δх < 1 deg / cm) on seed with dimensions of 4×4×20mm, oriented in the direction [010]. The drawing speed was approximately 2 mm / day, the rotation speed was 30–40 rpm. As a charge, a mechanical mixture of Li2CO3 (optical purity standard), MgO (optical purity standard), MoO3 (optical purity standard) reagents was used in quantities necessary to obtain a solution-melt with a molar ratio of Li2–2xMg2+x (MoO4)3: Li2MoO4 equal to 1:2 (for cases with Eu3+ ions 2:3), respectively. For growing a Li2–2xMg2+x (MoO4)3 crystal doped with Eu3+ ions, Eu2O3 (optical purity standard) was added to the charge in an amount of 10 at%, and doped with Сu2+ and Ti4+ ions in an amount of 1 at.%. The growing process was carried out from a platinum crucible with a diameter of 70 mm and a height of 120 mm on an installation with process weight control (laboratory unit HX‑620H). At the end of crystallization, the cooling rate of the crystal to room temperature was 30–50 °C per hour. For the study by the methods of photoluminescence and EPR spectroscopy, cubic samples cut into cubes 3×3×3 mm in size with reference to the crystallographic axes, polished from all sides, were prepared.

The photoluminescence and luminescence excitation spectra, as well as the photoluminescence lifetime, were recorded on a Fluorolog‑3 spectrofluorometer (Horiba Jobin Yvon) with a cooled PC177CE‑010 photon registration module equipped with a R2658 PMT. The instrument is equipped with a fluorescence lifetime measurement system based on the technology of time-correlated single photon counting (TCSPC) for measuring the emission decay kinetics. To measure the lifetimes in the nanosecond range, the device is equipped with a set of solid-state lasers of various wavelengths. The study of EPR spectra was carried out on a Varian EPR spectrometer E‑109 (Varian) in the X and Q frequency ranges in the temperature range of 77–300 K.
RESEARCH RESULTS AND THEIR DISCUSSION
Pure Li2–2xMg2+x (MoO4)3 crystals
In this work, we studied the photoluminescence spectra of undoped crystals Li2–2xMg2+x (MoO4)3 at room temperature 300K with excitation λex = 280nm. The photoluminescence spectrum is a single broad line with a maximum at a wavelength of about 520 nm. The luminescence decay curves are described by a two-exponential decay with lifetimes of 60 and 220 µs, respectively (Table).

The obtained kinetic characteristics of the luminescence of Eu3+ ions in the crystal under pulsed excitation at a wavelength of 400 nm into the5D1 state (where the Eu3+ ions quickly relax non-radiatively to a lower-lying state5D0) and a main luminescence peak is registered at a wavelength of 610–620 nm, which determines the characteristic red glow of the samples. The photoluminescence spectrum consists of four main peaks at 593, 616, 652 and 702 nm, which correspond to the following transitions5D0–7Fn (n = 1, 2, 3, 4) of Eu (III) (5D0–7F0 at 580nm,5D0–7F1 at 595 nm,5D0–7F2 at 618nm,5D0–7F3 at 656 nm and5D0–7F4 at 706 nm (Fig. 5). As well as for undoped crystals and crystals doped with copper and titanium ions, at excitation λex = 400nm, a wide band with a maximum in the spectrum at the wavelength near 520 nm is observed.
The luminescence decay curve has a two-exponential character with lifetimes of Eu3+ of0.57 and 3.4 ms (Table). The resulting lifetime of 0.57 ms is close to τ(5D0) values ​​for Eu3+ ions in monoclinic crystals. It can be assumed that europium ions replace magnesium ions in two of the three possible structural positions.
For conditions that cause a wide band with a maximum of 520 nm, the luminescence decay also represents a two-eponential dependence with lifetimes of 64 and 152 µs (Table). This suggests that in crystals doped with europium ions there are two types of centers, as in undoped with shorter (µs) lifetimes and longer ones (ms) characteristic for the transition in europium.
Li2–2xMg2+x (MoO4)3:Сu2+
For Li2–2xMg2+x(MoO4)3 crystals doped with Сu2+ ions, the photoluminescence spectrum at room temperature at excitation λex = 280nm represents a single broad line with a maximum near 520nm. The luminescence decay curves are described by a two-exponential decay with lifetimes in the microsecond range and are 33 and 187 µs, respectively (Table).

The EPR spectrum in the X frequency range at room temperature of the investigated crystal doped with copper ions is two quartet lines with an anisotropic g-factor. This spectrum is due to HFS from two isotopes of copper,63Cu and65Cu with I = 3 / 2 and a natural prevalence of 69.17 and 30.83%. From the study of the angular dependence, it is clear that the structure has two magnetically nonequivalent positions. Simulation of the angular dependence of the spectra [15] allowed us to calculate the parameters of the spin Hamiltonian: g|| = 2.398, g^=2.061, A||=102Hs, А^= 6Hs (Fig.6). The parameters of the EPR spectrum are fully consistent with those obtained for an identical crystal studied previously in [11]. Copper ions replace magnesium ions in the structural position – ​M3, for which the main values ​​of the g-factor g|| and HFS tensor A|| lie in the a plane and form an angle of 30° with the c axis.
Li2–2xMg2+x (MoO4)3:Ti4+
In the EPR spectra of Li2–2xMg2+x(MoO4)3 crystals grown with titanium, there are no spectra from titanium. This means that titanium is diamagnetic and enters into the structure of a Li2–2xMg2+x(MoO4)3 crystal in the Ti4+ state. Due to the absence of EPR spectra, it is very difficult to talk about the structural position of titanium ions. Studies of the luminescent properties of Li2–2xMg2+x(MoO4)3 crystals activated by titanium ions show intense luminescence with λ = 520nm. This suggests that, as in the case of other impurity ions, titanium ions mainly enter the position of magnesium with the formation of additional cation vacancies. The luminescence decay curves are two-exponential, as in the cases of pure, doped copper and europium crystals (Fig. 7). The lifetimes are 32 and 196 µs (Table 1).