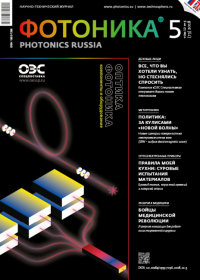 The need to develop methods for organs and tissues differentiation in surgery is discussed. A multifactor analysis of fluorescence and backscattering spectra was carried out for different tissues. Eight out of eleven types of tissues were verified with the accuracy of the order of 80%. The obtained results allow us to assume that optical technologies could form the basis for the method of navigation in robot-assisted and low-invasive surgery in the future.

Upon completion of the collection of the fluorescence signal, multiple pulses from a white light source (a xenon lamp) were automatically fed to the tissue, followed by a registration of backscattering broadband spectrum. For our study, the number of pulses was four, since it was shown empirically that with this number of pulses, it is possible to obtain the largest detectable signal, not exceeding the maximum possible for instrumental registration without saturation.
For the analysis of fluorescence spectra, we used an array of fluorescence contrast coefficients [7]:
.

For tissue backscattering spectrum that depends only on the properties of the tissue itself, normalization of the measurement results was performed with a white light source by the spectra taken from the material having a known backscattering coefficient r – ​fluoroplastic (r = 0,85).
For each tissue sample, 1500 values of fluorescence intensity in the wavelength range 400–730 nm, normalized by backscattering peak (excitation wavelength λe = 365 nm) and 1 600 values of backscattering intensity in the range 390–740 nm were analyzed when the tissue was exposed to a white light source.
To reduce the number of variables, the principal component analysis with rotation (varimax) was applied. For the fluorescence spectrum, 98.3% of the dispersion was explained by five principal components. For the spectrum of the intensity of diffuse scattering, 6 principal components allowed to explain 92.2% of the dispersion. The 11 principal components obtained were included in the discriminant analysis. Statistical processing of data was carried out by IBM SPSS Statistics v23 (IBM corp., USA).
The study was carried out on a new diagnostic instrument "Multicom", developed by LLC " Center for Research and Development EOS-Medica" combining the principles of laser fluorescence spectroscopy and backscattering spectroscopy [8]. Schematic diagram of the instrument is shown in Fig. 2.
Control and processing system may generate, receive and process two basic control commands: "observation" and "measurement". The "observation" command activates the selected laser source continuously and continuously registers fluorescence spectrum of the secondary radiation by the spectrometer. The "measurement" command stores the last measured fluorescence spectrum in the device memory, the laser source is switched off, the white light source is turned on for a short time and the spectrometer registers the reflection spectrum in white light, after which all the measured spectra are transferred to the control and processing system. It should be mentioned that the arrangement of the lighting fibers is uniform, around the receiving fiber, thus achieving the equality of diagnostic volumes for two successive measurements.
RESULTS OBTAINED
The results of discriminant analysis using 11 principal components from fluorescence intensity spectra and backscattering intensity are presented in Table. As you can see, 88.2% of the selected initial grouped observations are classified correctly. Thus, the proposed physical and mathematical approaches allow to differentiate the examined organs and tissues with relatively high accuracy.

CONCLUSION
The instrument allowing for rapid verification of different tissues and organs, may be useful for intraoperative navigation and in the future may allow to reduce the risk of jatrogenic injuries in surgery. One possible approach for creating such an instrument can be a combined application of different optical methods, namely, laser fluorescence spectroscopy and backscattering spectroscopy. The results of our research have shown that a multifactor analysis of fluorescence and backscattering spectra from biological tissues can successfully differentiate organs and tissues. Thus, nine out of 11 dedicated contact tissue types can be determined with an accuracy of approximately 80%. Such a result is a good basis for carrying out a larger experiment with a large training sample and a large number of tissue types. Since the applied optical methods are available, they do not damage the tissue and give real-time information with user-friendly interface, they can become a reliable additional navigation method during surgery.
Photonics Russia. Issue #5/2018
Readers feedback
Leave a feedback