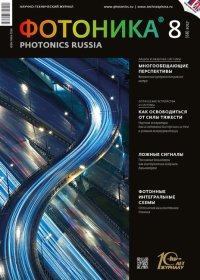 In just over 10 years, supercontinuum power levels have grown an order of magnitude with spectral range spanning from 380 to 4400 nm. Enhanced understanding of supercontinuum generation in optical fibers will enable continued product and application evolution.

Issue #8/2017 A.Devine, R.Hodder
Supercontinuum Sources: An even brighter future awaits supercontinuum fiber
In just over 10 years, supercontinuum power levels have grown an order of magnitude with spectral range spanning from 380 to 4400 nm. Enhanced understanding of supercontinuum generation in optical fibers will enable continued product and application evolution.
Теги:   mopa architecture   mopa-конфигурация   photonic crystal fibers   supercontinuum fiber lasers   волоконные суперконтинуумные лазеры   фотонно-кристаллическое волокно
Spectral broadening and new frequency generation are features of nonlinear optics that have been utilized and studied for many decades. In the 1970s, the generation of an extended "white light" source through extreme nonlinear spectral broadening of optical pulses eventually led to the term "supercontinuum" [1]. However, because the nonlinearity of glass is relatively low, it requires very high peak powers to generate significant spectral broadening in bulk material; the interaction length is inversely proportional to the spot size: the tighter the focus, the shorter the effective interaction length (typically a few centimeters). The obvious solution is to confine light and use the guiding properties of optical fibers to extend the interaction length.
But using optical fiber only partially solves the problem, as the spectral broadening due to the nonlinear properties of standard fibers (SMF‑28 type) results in a spectrum extending to mainly longer wavelengths and, with the pump around 1064 nm, light in the visible part of the spectrum is not generated.

The whole landscape of supercontinuum generation changed in the mid‑1990s with the invention by Philip Russell and Jonathan Knight of Photonic Crystal Fibers (PCFs)—spectacular-looking optical waveguides with properties set not by the material, as in conventional fibers, but by arrays of tiny holes surrounding the core.
The unusual structures of these PCFs have a number of benefits, ranging from the relatively low manufacturing cost (the whole structure is based on pure silica glass without any dopants) to unique optical properties. The most notable one is the ability to tailor the dispersion properties such that the zero Group Velocity Dispersion (GVD) wavelength can be moved to the 1 µm region and to even shorter ones. The significance of these unique features was first understood in 2000 by Bell Labs in its demonstration of supercontinuum generation in a PCF pumped by a Ti:sapphire laser [2].
It is now well understood that if the pump wavelength lies in the vicinity of the zero GVD wavelength, then nonlinear spectral broadening can develop almost symmetrically to both short and long wavelengths as a result of the group velocity matching for Stokes and anti-Stokes signals, and thus one can create an extremely broad spectrum covering the entire 400–2500 nm wavelength range.
In 2005, turnkey supercontinuum fiber lasers were highly novel and attracted attention from early adopters – mainly researchers and corporate research groups curious about how the technology could be incorporated into their research and product development. Today, the supercontinuum is an established illumination tool within research and is becoming a commodity illumination source within industrial and medical tools and instrumentation.
Over the last decade, the development of supercontinuum lasers has been driven by both technological advances and ever-evolving market requirements. From a scientific standpoint, supercontinuum laser manufacturers have been driven to understand the boundaries and limitations of the technology, whereas the market has required us to tailor performance for specific applications. A good understanding of the underlying technology also allows lasers to be built in a cost-effective and reliable manner.
Since their first introduction, supercontinuum lasers have developed in three well-distinguished directions: higher power, broader spectral range, and high volume manufacture when low cost and qualified reliability are paramount.
POWER SCALING
Almost all supercontinuum fiber lasers share the same basic configuration: a high-peak-power pump source to effectively initiate nonlinear effects in optical fibers and a length of PCF for supercontinuum generation.

The pump sources are typically based on a master oscillator power amplifier (MOPA) architecture, where ultrashort pulses at approximately 1064 nm from a master oscillator are amplified within a high-power ytterbium-doped fiber amplifier, pumped by one or more high-brightness pump laser diodes or diode modules.
Pulses produced using this MOPA architecture have high peak intensities, are injected into a highly nonlinear PCF, and undergo spectral broadening to generate a supercontinuum. To a first approximation, the extent of spectral broadening is governed by the peak power of the pulse that – for a given average power of the MOPA laser – is inversely proportional to both the pulse duration and its repetition rate.
The flexibility of the MOPA design allows the parameters of the master oscillator and fiber amplifier to be altered independently. The optical power launched into a PCF can be scaled up in a relatively efficient and effortless way by simply using a master source at a higher repetition rate and a fiber amplifier capable of maintaining higher average power. In this context, it is worth mentioning that the highest optical powers in supercontinuum generation can be achieved when the fiber pump source operates in the continuous-wave (CW) regime. At first glance, it appears that to achieve significant spectral broadening one would require average powers from a CW fiber laser in the region of a few kilowatts. However, in reality, sizeable spectral broadening can be observed at power levels of only tens or hundreds of watts.
For CW-pumped supercontinuum sources, the nonlinear effects in PCFs convert the initial temporally "flat" optical signals from the power amplifier into a stream of chaotically distributed short pulses with peak powers that are an order of magnitude higher than the launched signal, thus creating a fairly broad supercontinuum spectrum [3].
Current activity in this area is largely confined to the research laboratory, and all commercially available supercontinuum lasers use a master oscillator producing optical pulses with well-defined parameters. Such a "well-behaved" master oscillator is extremely important for practical applications. As previously mentioned, the nature of supercontinuum generation is based on nonlinear spectral broadening of individual pulses and therefore by varying both the MOPA repetition rate and average power, the temporal distance between individual supercontinuum pulses can be controlled – an extremely important feature for applications involving time-resolved measurements.
In a single supercontinuum laser, flexibility in the oscillator repetition rate can be realized using a so-called pulse picker: an acousto-optical modulator acting as a gate for the incoming stream of optical pulses (see Fig. 1). For a supercontinuum fiber laser fitted with a built-in pulse picker, spectral density decreases with repetition rate, but the pulse energy of each supercontinuum pulse remains constant, resulting in an optical spectrum shape that is independent of pulse repetition rate.
Pulse-picked supercontinuum sources operating at various repetition rates provide nominally identical pulse spectral shapes, but different pulse densities.
MORE BANDWIDTH: UV-ENHANCED SUPERCONTINUUM
Early supercontinuum fiber lasers delivered high brightness in the 500–2400 nm spectral range. Since many biological molecules absorb in the blue-ultraviolet (UV) region of the electromagnetic spectrum, life-science applications such as fluorescence imaging and time-correlated single-photon counting are well suited to a broadband supercontinuum laser source that extends further into the UV.

This continued requirement to push the short-wavelength edge to below 400 nm (and even further down into the UV) has required a greater technical understanding of the physics behind supercontinuum generation and was aided by research published in 2008 [4]. In simplified terms, supercontinuum generation is a complex four-wave mixing process. To make this process efficient, the group velocities of the Stokes and anti-Stokes components should be equal (or very close)—which is why the pump wavelength should be in the vicinity of zero GVD.
The dispersion of photonic crystal fibers (PCFs) can be tailored to enhance the short-wavelength content of supercontinuum lasers. Modification of the PCF design (hole size to hole-spacing ratio) allows group-index matching of long-wavelength spectral components to shorter wavelengths.
Material loss in silica glass at wavelengths >2500 nm becomes too high for efficient generation of the Stokes components, and in conventional PCFs the group velocity of this band corresponds to that of the anti-Stokes component at approximately 450 nm (see Fig. 2). Taking 2500 nm as a fixed wavelength that cannot be moved (because of material loss), the only way to extend the spectrum into the UV is to engineer the dispersion of the PCF in such a way that the group velocity at 2500 nm matches that at the shortest wavelength as possible in the UV. By altering the design of the PCFs by changing the size and position of the holes, one can tailor this dispersion profile to optimize UV generation down to 375 nm in the resulting supercontinuum spectrum (see Fig. 3).
UV-enhanced supercontinuum spectra (SuperK EXU‑6) during continuous long-term operation of >2500 hr show the maturity and reliability of today’s supercontinuum technology.
LOW COST AND RELIABILITY OPEN NEW MARKETS
Supercontinuum cost reduction comes not only from production volume increases, but also through technological advances such as pump diode evolution. The cost/watt ratio for high-brightness fiber laser pump power continues to fall from a 2003/04 value of approximately $200/W to below $10/W today. Reliability enhancement comes as a direct result of experience and design engineering. With 10 years of experience and maturity coupled with significant investment in highly accelerated life testing from industrial partners, high-power supercontinuum laser technology is now proven with greater than 10,000 hours of continuous use in challenging environments.