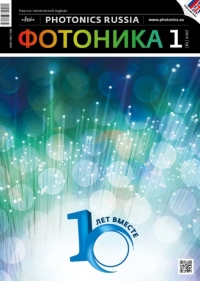 Content of heavy iodine isotope in the air close to the nuclear power plants or other radiochemical enterprises can be an indicator of the radioactive contamination. Laser measurement methods of molecular iodine concentration in gaseous media rely to the results of numerical simulation methods.

Issue #1/2017 V.Privalov, V.Shemanin
Lidar sounding of iodine molecules in atmosphere
Content of heavy iodine isotope in the air close to the nuclear power plants or other radiochemical enterprises can be an indicator of the radioactive contamination. Laser measurement methods of molecular iodine concentration in gaseous media rely to the results of numerical simulation methods.
Теги:   iiodine molecule   lidar   radioactive contamination   лидар   молекулярный йод   радиоактивное загрязнение
INTRODUCTION
It was shown in the papers [1, 2] that the heavy isotope of iodine 131I2 can serve as the indicator of radioactive contamination. This indicator is important during the evaluation of structure of process gases and during the monitoring of atmosphere around nuclear power plants (NPP) or other radiochemical enterprises. It is stipulated by the interest in laser methods of measurement of molecular iodine concentration in gas media. Remote measurement of iodine molecule concentration on a real time basis is a complex task. In the papers [2, 3], the estimations of potential capabilities of the method of differential absorption were performed [1, 4, 5]. The assumption was made that the line of laser generation can be described by delta function, therefore its spectral width does not influence on sounding results. However, radiation spectrums of actual lasers used in lidar measurements have finite width. In the paper [6] on the basis of numerical computations of the lidar equation for differential absorption and scattering by gas molecules in atmosphere using the genetic algorithm it was shown that it is necessary to take into account the finite width of laser generation line in order to determine very low concentrations of detectable molecules in medium.

The lidar transmitting system consists of two lasers 8, the energy of the first laser radiation in the pulse with duration of 10 ns at the wavelength of 532 nm () is equal to 25 mJ, and the energy of the second laser radiation is equal to 40 mJ at the wavelength of 1064 nm (). The area of collecting aperture of telescope 10 is S0 = 0.125 m 2. The intensity of laser radiation at the wavelength of 532 nm, which propagates through the atmosphere layer with iodine molecules of set concentration there and back, is decreased at the expense of absorption in iodine [3, 7], and then it is directed to photodetector 1 through glass light filter 2.
LIDAR EQUATION OF DIFFERENTIAL ABSORPTION AND SCATTERING
The optical axes of lasers and receiving telescope are directed along the axis Z. As it was previously [12], the directivity diagrams of emitter θL and collecting telescope θT are low θL ≈ θT ≈ 10–4–10–3, therefore the solid angle of divergence of laser radiation will be determined as ΩL = πθL2 and the field of view of receiving telescope – ΩT = πθT2.

Let us designate the optical characteristics of atmosphere at sounding route z through the attenuation coefficient , and the properties of topographic target – through the reflection coefficient or cumulative coefficient of Mie elastic scattering and Rayleigh molecular scattering . Each of two lasers of lidar transmitting system shall be characterized by the power of laser radiation P1 or P2 sent into atmosphere with the laser pulse duration of or , and the line of laser radiation shall be considered as Gaussian line with maximum at the frequency or and half-widths or . Then, the power of laser radiation P1 (or P2) at lidar photodetector can be represented in accordance with [4] integrating at the full width of generation line from () to () in the form:
, (1)
where T (ν, z) is the transmission at the frequency of route section from lidar to studied volume, which is equal to the following expression in accordance with [11]

Using the formula (2) in the expression (1) we will finally obtain the lidar equation for elastic scattering in backward direction for laser generation line with finite half-width in the following form:
(3)where the lidar constant is introduced.
Information on iodine molecule concentration is contained in cofactor in the expression (2), and the attenuation coefficient in atmosphere is determined on the basis of correlation in the form [1, 10]
. (4)
here the first summand is the attenuation coefficient of atmosphere at the laser radiation wavelength after deduction of studied molecules, and the second summand is the product of cross-section of resonance absorption of iodine molecules and their concentration.

In order to implement the method of differential absorption and scattering [13], let us take two lidar equations of the type (3) for two frequencies of laser radiation and . Let us believe that the second wavelength is outside the absorption band of iodine molecule; let us substitute in the first equation for the expression (4) and divide one expression by another one. As a result, we will obtain the equation for the most general case of differential absorption and scattering with the assumption on the difference of all cofactors depending on laser radiation frequency as in the papers [10, 11].
Let us approximate the instrument function by Gaussian curve and contour of iodine molecule absorption band – by Lorentz function [11]. Let us believe that atmosphere is homogeneous and coefficient of laser radiation attenuation in atmosphere is the function of frequency only .
Using the error integral erf (Γ) [15] and having proceeded to the optical density, as previously in the paper [8], we can write the final equation in the form:
(5)
SOLUTION OF LIDAR EQUATION
Let us consider the parameters of this task for our experimental case. Let us believe that for our lidar G1 (z) = G2 (z), and reflection coefficients are approximately identical for both channels and equal to 0.15 – for diffuse target and 10–7 – for total elastic aerosol scattering in atmosphere [4]. The energy E = τP in the pulse with duration of 10 ns of laser radiation at the wavelength of 532 nm () is equal to 25 mJ, at the wavelength of 1064 nm () – 40 mJ. The half-width of generation line Г2 will vary within the range of 1–5 GHz and Г1 – within the range of 2–10 GHz respectively. Let us believe that the half-width of instrument function is higher by order than the half-width of laser generation line, and this assumption is quite acceptable for industrial lasers and interference light filters used in the capacity of lidar spectrum analyzers [3]. Let us assume that it is equal to 100 GHz. The values of coefficients of attenuation in atmosphere were taken from the paper [4] and are equal to  0.16 km–1,  0.12 km–1 respectively. The maximum value of absorption cross-section at the wavelength of 532 nm for iodine absorption band is  = 4.6 10–18 cm 2, and half-width of this band – Г3 = 767 GHz [7] according to the data given in the paper [11].

CONCLUSION
Thus, it was shown for the first time that taking into account the finite width of laser generation line during sounding of iodine molecules in atmosphere by the lidar of differential absorption and scattering noticeably demonstrates the decrease of optical density value with the growth of sounding distance and increase of iodine molecule concentration. Thus, for the concentration of iodine molecules of 1010 cm-3 this decrease is equal to 1.66 times for the distance of 100 m and 1.13 times for the distance of 5 km.
Photonics Russia. Issue #1/2017
Readers feedback
Leave a feedback