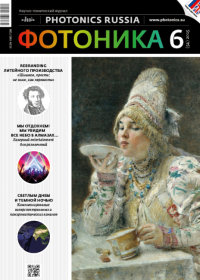 Results of the works on creation of single-frequency semiconductor lasers tunable by the wavelength with external cavity on the basis of fiber Bragg grating formed in single-mode fiber light guide are given. The methods of discrete and continuous tuning of radiation wavelength and methods of oscillation of dynamically stable laser radiation with the narrow line width (less than 10 kHz) within the range of 635–1650 nm are considered.

Issue #6/2015 V.Duraev, S.Medvedev
Single-Frequency Semiconductor Lasers Based on Two-Pass Amplifiers
Results of the works on creation of single-frequency semiconductor lasers tunable by the wavelength with external cavity on the basis of fiber Bragg grating formed in single-mode fiber light guide are given. The methods of discrete and continuous tuning of radiation wavelength and methods of oscillation of dynamically stable laser radiation with the narrow line width (less than 10 kHz) within the range of 635–1650 nm are considered.
Теги:   dwdm-systems   dwdm-системы   fiber optic communication   laser   photonic components   волоконно-оптические линии связи   перестраиваемый лазер   фотонные компоненты
R


adiation of semiconductor (s/c) injection lasers has several extensional modes and quite large spectrum width (1–3 nm). For many practical applications of lasers the single-frequency oscillation mode is important. Single-frequency lasers found the widest application in the technologies of fiber optic communication lines with the wavelength division multiplexing, high resolution spectroscopy, interferometry, optical sensors, medicine, ecology, and therefore the obtainment of such mode is important engineering task.

Besides, such significant peculiarity of s/c lasers as the capability of wide tuning of wavelength within the limits of the whole spectral range of amplification (20–40 nm) additionally widens the scope of their use.

At the first stage of the creation of s/c tunable lasers, the laser diodes (LD) with short cavity (100–200 µm) were used. Taking into account the fact that intermodal interval for such cavities is large, the difference in amplification of adjacent modes is significant. As a result, the radiation spectrum of the lasers with short cavity usually has one extensional mode. Tunings of the wavelength of these lasers can be performed by the variation of temperature and pump current. However, low value of output power, large width of radiation line (100 MHz) and unstable work mode are the evident shortcomings, which accompany the operation of such lasers. Distributed feedback lasers (DFB lasers) obtained the wider circulation. This class of lasers has more stable single-frequency mode of operation, comparatively small optical power and rather narrow width of the radiation line, approximately 1–10 nm [1].

However, many practical uses of single-frequency coherent radiators require significantly higher values of power and stability of the width of narrow radiation line. Most commonly, in such cases the lasers with external cavity are applied, and the diffraction grating is used in the capacity of external cavity. The main elements of the structure of similar radiators include laser crystal and Bragg grating formed in single-mode light guide [2]. The back crystal face, which forms the cavity, has reflective coating with the reflection coefficient up to 90%; the front face has antireflection coating with the transmission coefficient of 0.01%. Reflection coefficient of grating is usually equal to 10–20%, grating selectivity is 01–10 nm. For better matching of laser crystal with fiber light guide, the cylindrical microlens is formed at the edge of light guide; it increases the joining efficiency up to 80%.

When the spectrums of LD amplification and diffraction grating reflection match, the radiation becomes more stable and narrow than in DFB lasers [3]. However, it should be remembered that with the increase of mismatching between these spectrums the value of maximum power, at which the radiation could remain stable, decreases. The stability can be increased constructively in case of suppression of the mode oscillation of Fabry-Perot cavity of laser diode crystal. For this reason, the construction of the active element in the form of two-pass amplifier obtained wide circulation (Fig. 1). Due to the introduction of bevel face in the diode, the oscillation of its own modes does not take place.

The oscillation wavelength of the laser with Bragg grating can determined on the basis of the known correlation: 2Λ · neff = m · λB, where Λ is the grating period; λB is the laser wavelength; neff is the efficient refraction index; m is the order of wave mode. The whole variety of radiation and signal control devices with the use of Bragg gratings is designed on the basis of this formula.

When working on the creation of lasers oscillating the dynamically stable radiation with narrow line width (less than 10 kHz) within the range of 635–1650 nm, the heterostructures InGaAs/GaAs and InGaAsP/InP with quantum-dimensional layers made by the method of MOC-hydride epitaxy were used [4]. The construction of LD with underetched active region and isolation ZnSe was used. The length of laser crystal varied within the range of 600–1200 µm. As it was noted previously, the wavelength tuning is possible within the limits of the line of diode amplification. In practice, the single-frequency mode of oscillation is managed to be obtained within the limits of this range length counted at the level of half power. When joining the LD with single Bragg grating, the oscillation starts at the wavelength of grating reflection (tabl.). Construction of the laser with fiber Bragg grating (FBG) and two-pass amplifier is shown in Fig. 2.

Required single-frequency mode and wavelength tuning were provided using the single (discrete) and quadruple (sequentially formed) Bragg gratings with different period formed at the same area of light guide. Fiber Bragg gratings used in this work were formed in the fiber with the use of radiation of the second harmonic of argon laser (λ = 244 nm) according to the scheme of Lloyd interferometer [5]. The length of gratings was 4–7 mm.

For the discrete tuning among four wavelengths, the fiber light guide with four Bragg gratings having various resonance wavelengths was used. The gratings were formed by UV radiation by the sequential exposure of the same area of fiber light guide. The transmission spectrum of such system of gratings is shown in Fig.3. The reflection coefficient of gratings was ≈25%. The spectral width of reflection peaks ≈0.3 nm; the distance between them – 0.4 nm. In this case, the laser crystal capable to oscillate the radiation at the wavelength of λ=1540 nm was also used. The crystal length was also 1000 µm.

The dependence of tuning of laser radiation wavelength at the expense of variation of pump current is shown in Fig.4; the threshold value of current was Ithreshold=54 mA. All resonance lines of composite grating are in close agreement with the maximum of contour of laser amplification line. Production method of the tunable laser diodes with the radiation at λ=1546 nm and four Bragg gratings in one light guide shows high reproducibility of parameters during the current tuning of wavelength. The results, which have been obtained previously when at Т=25 °C the wavelength tuning was performed by the LD pump current variation amplifying all four single-frequency modes of hybrid cavity with the level of suppression of side modes of not less than 30 dB, confirm all company products:

At the pump current Ip=175 mA, the oscillation conditions at all four resonance wavelengths of Bragg grating turn out to be similar. Therefore, in the spectrum of output radiation, all four spectral lines are present with approximately equal values of intensity.

The analogous switching of oscillation wavelength was achieved at the direct pump current and variation of the temperature of laser crystal. The continuous tuning of wavelength can be performed within the limits of the grating reflection spectrum at the expense of variation of injection current or LD temperature [6]. The tuning value depends on the contour of grating reflection (0.15–0.2 nm). In practice, it was shown that such tuning method does not provide the stability of LD radiation.

More stable tuning within broader range is possible at the expense of variation of fiber refraction index in the area of grating. For this purpose, the fiber with grating is located on piezoceramic plate which is capable, as is known, to change its linear dimensions. The result of obtained radiation spectrums for eleven values of voltages supplied to the piezoceramics is shown with the use of the plot in Fig. 5 [7]. In Fig. 6, the relevant dependence of radiation wavelength on the voltage supplied to piezoceramics is given.

Thus, having created the radiator construction we assured that with the use of amplifying properties of s/c lasers with external cavity, the output mirror of which is represented by the superposition of several gratings with various resonance wavelengths, at the expense of variation of injection current and/or temperature of laser diode (LD) active region the sequential or simultaneous oscillation of radiation at these wavelengths is formed. The construction also provides opportunities for continuous tuning of wavelength at the expense of variation of grating compression/extension which is highly sought when using these lasers in high-resolution spectroscopy, fiber optic communication lines with the wavelength division multiplexing of channels, interferometry and similar applications.
Photonics Russia. Issue #6/2015
Readers feedback
Leave a feedback