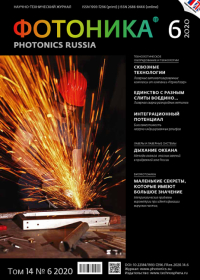 A system for recording interferometer readings error associated with the temperature change in example stand-­alone laser meter of pressure fluctuations is described. The peculiarities of registration and accounting of temperature outside and inside the device are considered, the results of measuring the corrected pressure fluctuations are compared with those theoretically calculated for the frequency range of tides. It is shown that it is strictly necessary to take into account the temperature error, which significantly distorts the primary data.

A system for recording interferometer readings error associated with the temperature change in example stand-­alone laser meter of pressure fluctuations is described. The peculiarities of registration and accounting of temperature outside and inside the device are considered, the results of measuring the corrected pressure fluctuations are compared with those theoretically calculated for the frequency range of tides. It is shown that it is strictly necessary to take into account the temperature error, which significantly distorts the primary data.

The high sensitivity of the laser interferometer, as well as the widest frequency range, makes it possible to use it for monitoring many physical quantities by direct and indirect methods. During measurements, a change in the state of the interference pattern is registered, formed by a certain path of rays in the interferometer, the path length of which is directly or indirectly related to the measured physical quantity. Based on this principle, laser meters for microvibration of the earth’s crust (strainmeters) [1], laser meters for atmospheric pressure variations (nanobarographs) [2] and hydrosphere [3], laser gravimeters [4] and other devices have been created.

However, in spite of the potentially unique characteristics attainable in meters based on laser interferometers, the actual creation of instruments that actually have such parameters is associated with the solution of important engineering problems, as well as special post-processing of the data obtained. Ignoring or incorrect solution of these issues leads, for example, to the fact that the recorded signal is distorted due to “mixed” information that has nothing to do with the measured value. In particular, this type of equipment requires very stable microclimate conditions in the interference node or its changes must be taken into account.

Humidity, pressure and temperature affect the change in refractive indices, or simply change the physical dimensions of the device components, thus introducing an error in the measurements.
Let us consider the effect of temperature change on the data obtained by the interferometer using the example of a previously developed laser meter of pressure fluctuations [5]. Our use of such meters has allowed us to accumulate extensive experience with such devices. Modifications were created using different radiation sources and device layout [6].

The basis of the device is a Michelson interferometer, assembled according to a modified scheme of an unequal type. The optical-­mechanical diagram of the device and its principle of operation are shown in Fig. 1.

A gas helium-neon frequency-­stabilized laser 1 is used as a radiation source. Its beam is divided on a dividing cube 4 into two parts, forming the “arms” of the interferometer, one of which is the reference. The beam, which propagates along the second, passes through a mirror, fixed on the inner side of the membrane installed in the lid of the device. Seawater pressure is produced on the outer side of the membrane 3, and such “arm” is thus a measuring one. Spatial convergence of both rays falling back on the dividing cube 4 (after they have passed along their optical paths) allows you to obtain an interference pattern of variable brightness caused by a change in the difference in the path of the rays. The change in brightness is recorded by the photodetector 2 of the registration system 7, which generates a signal of the difference in the path of the rays. This signal is output and is also fed to one of the piezoceramic elements 5 to return the interference to an extreme, i. e. in this way, the resulting travel difference is compensated.

The device uses a hydrostatic pressure compensation system. It is necessary to equalize the pressure on both sides of the membrane before starting measurements. The purpose of the system is not to allow the membrane to be crushed into the space of the device when the hydrostatic pressure builds up. Thus, at the start of the measurement, the membrane remains in the zero offset position. To do this, when the device is immersed, on command, the solenoid valve 11 opens, which passes air from a special elastic container 12 into a small-­volume chamber (compensation chamber 6) between the membrane and the main body space, separated from it by a transparent sealed window 9. Air from the container is pumped inside a compensation chamber with a pressure equal to the outboard pressure. When the device is lifted back, the air from the compensation chamber is vented back to the external reservoir in the same way, again equalizing the pressure on both sides of the membrane. Fig. 2 shows a photograph of the practical implementation of the described device.

An additional sealed connector is installed on the lid of the device for optional equipment. It is a universal interface equipped with electrical power supply and data line. With it, the meter can work in conjunction with depth sensors, hydrophones, hydrological and other meters, telemetry radio modules. In addition, the device is equipped with a hermetic box that is connected to the main power and communication hermetic connector to ensure the autonomy function. The electric power supply system installed there with a capacity of about 8,000 W∙h and a registration unit based on an industrial computer allows the meter to operate in an stand-­alone mode for more than six days.

The interferometer uses a system for recording an interference meter for pressure variations [7]. This model of the registration system makes it possible to obtain an accuracy of displacement of the membrane center of 0.75 λ / (2N–1) or 0.06 nm. The recalculation of the recorded displacement in the pressure variation is carried out according to the formula describing the behavior of the center of the flat membrane fixed at the edges [8]:
.

As noted at the beginning of the article, the presented calculated characteristics of the device are quite achievable, however, the data obtained are subject to significant distortions due to errors introduced by the microclimate parameters inside the measuring installation.
Let’s consider an example of a recording (Fig. 3) made in Alekseev Bay on the Popov Island in the Amur Bay in autumn 2019. The duration of the recording section is more than 90 hours (about 4 days).

At the time when the record was made, there were no significant winds, atmospheric depressions, precipitation and other factors that could affect the sea level in this area of ​​the coastline, however, the record of the natural and most powerful oscillatory process – ​tides here is highly distorted and clearly has “extraneous inclusions”. Looking ahead, we can say that we already know what these errors are, but this record demonstrates what the measurements made by the interferometer look like without special data correction regarding these errors.
Fig. 4 shows a graph of the recording of a temperature sensor placed in the metal of the interferometer’s support plate. These fluctuations are caused by a change in the temperature of the water outside the device, which, through the metal of the cover and body, affects the temperature change inside the device.

This, in turn, leads to a change in the length of the reference “arm” due to thermal expansion of the interferometer parts. Using two sensors, external and internal ones, we get information about the temperature field outside the device, as well as the ability to calculate the temperature gradient that affects the instantaneous correction factor. The function of the dynamically changing correction factor was determined by calculation and corrected during the tests. After that, the function of correcting the interferometer readings was included in the measurement processing software. In this case, the calculation of the final pressure value is made according to the formula Pcorr = Pi – Ti ∙ Kcorr i. As a result, we obtain a series of data of the form shown in Fig. 5.

This example shows that the system for correcting the temperature error in the interferometer data works properly, its installation on the device is justified and expedient, as well as that this technique can be used on interferometers of this class used in a wide range of tasks related to measuring variations pressure and, in particular, when studying the amplitude-­phase fluctuations of the hydrosphere pressure in a wide frequency range.

Financing
The research was carried out with partial financial support from RFBR grant No. 18–05–80011_Dangerous phenomena.