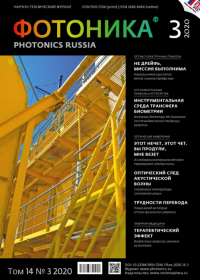 Estimates of the linear optical properties of promising material for the THz modulators manufacture, i. e., thin films of the mixture of tungsten disulfide and boron nitride with hexagonal lattice on polyethylene terephthalate (PET) substrate in the broadband terahertz frequency range are presented in this paper. In the range from 0.5 to 2.5 THz the films showed high transparency exceeding 90%. The calculated refractive index value 1.75 exceeded the ones for TPX and PET – materials used in the manufacture of THz optics.

Estimates of the linear optical properties of promising material for the THz modulators manufacture, i. e., thin films of the mixture of tungsten disulfide and boron nitride with hexagonal lattice on polyethylene terephthalate (PET) substrate in the broadband terahertz frequency range are presented in this paper. In the range from 0.5 to 2.5 THz the films showed high transparency exceeding 90%. The calculated refractive index value 1.75 exceeded the ones for TPX and PET – ​materials used in the manufacture of THz optics.

INTRODUCTION
In the past few years, the volume of data transmitted bypassing wired communication lines has grown significantly, thus increasing the need for ultrafast and broadband information transmission systems. One possible solution to this problem was the transition of wireless networks from the radio range to millimeter waves, but over time, it became clear that further development would require coverage of other parts of the electromagnetic spectrum. The terahertz (THz) frequency range is especially distinguished here, since it combines the capabilities of both radio-­frequency and optical devices, which opens up broad prospects for the development of high-speed wireless communication systems [1].

Nevertheless, work in the THz part of the spectrum has begun relatively recently, so the issue of creating optical components and devices capable of working effectively in this range is currently an acute issue. In recent years, certain successes have been achieved: new methods for generating high-intensity radiation have been developed [2], and various methods for controlling them have been investigated [3].

However, work in this area is far from complete – ​there is still great potential for expanding the operating range of systems, as well as for increasing the modulation depth. The basis for the implementation of this can serve as new materials and structures that are currently being actively developed by scientists around the world.

MATERIALS AND METHODS
Not so long ago, studies began on two-dimensional (2D) materials, such as graphene and thin films of transition metal dichalcogenides (TMD) or various oxides [4]. For example, tungsten disulfide (WS2), which in its «bulk state» is a van der Waals heterostructure, also belongs to TMD [5]. In the form of a thin film, this material is a set of several monolayers containing a layer of tungsten atoms, enclosed between two planes of sulfur. The set of unique properties of WS2 opens up wide possibilities for its application in communication systems, as well as THz spectrometers as a radiation modulator [6, 7]. Furthermore, one of the works [8] demonstrated the possibility of using thin films of boron nitride with hexagonal lattice (hBN) to increase the stability of the optical properties of molybdenum disulfide, a material that is largely similar in structure to WS2.

Based on the foregoing, it was decided to study the optical properties of WS2 mixed with hBN in the broadband THz frequency range, which will allow us to take into account the data obtained in further work on the development of effective means of controlling THz radiation.

WS2 / hBN films were obtained by liquid phase exfoliation from the bulk form of WS2 and BN crystals. As a substrate, a plane-­parallel 1-mm-thick polyethylene terephthalate (PET) plate was used. The choice of this particular material is associated with its low absorption in the THz frequency range from 0.1 to 2.5 THz. To transfer WS2 / hBN to the substrate, the standard method for applying thin films using a membrane was used, which is subsequently removed mechanically. The thickness of the sample was about 50 μm.

EXPERIMENTAL SETUP
The studies were carried out using a laboratory setup of THz time-domain spectroscopy of TeraPulse 4000 manufactured by TeraView, shown in Fig. 1. In this system, a photoconductive antenna illuminated by the radiation of a femtosecond (fs) fiber laser is used as a THz generator. The duration of THz pulses is 1.8 ps, and the spectral range covers frequencies from 0.5 to 2.5 THz.

In all calculations, the pulse passing through PET rather than through air was chosen as the reference signal. Due to this, the influence of the substrate on the obtained data was excluded. At the same time, the small thickness of the sample leads to the imposition of pulses on each other, many times reflected from the faces of a thin film. This circumstance requires a separate accounting, a detailed algorithm of which is given in [9].

The measurements were carried out several times at different points of the sample, after which the obtained data were averaged. This was done in order to minimize the effect on the results of possible inhomogeneities of a thin film.

RESULTS AND DISCUSSION
The temporal forms of the measured signals are presented in Fig. 2a, and Fig. 2b shows the corresponding spectra. The absorption lines arising at frequencies above 1 THz are determined by the content of water vapor in the air.

The transmission spectra of broadband THz radiation through a WS2 / hBN thin film are shown in Fig. 3a in fig. 4 shows its refractive index.

CONCLUSION
It was demonstrated that the transmission of a sample of tungsten disulfide mixed with boron nitride is 90% in the range from 0.5 to 2 THz. This indicates a high transparency of WS2 / hBN thin films in the indicated frequency range. At the same time, despite the small phase delay introduced by the film into the signal, WS2 / hBN has a refractive index exceeding 1.75 in the range of 0.5–2 THz. Comparison with similar films of transition metal disulfides is difficult, since studies of their optical properties in the THz range have not been carried out before. However, the obtained refractive index exceeds that for, for example, polymethylpentene (1.46) or polyethylene terephthalate (1.65), the materials widely used for the manufacture of THz lenses, windows, and other optical elements. Therefore, when designing devices requiring a large number of layers of the mixture, there is an urgent need to take into account the refraction in WS2 / hBN.

AUTHORS CONTRIBUTION
E. N. Oparin, V. G. Bulgakova and S. A. Pozdnyakova conducted the experiments, E. N. Oparin processed and analyzed the experimental data, M. O. Zhukova prepared a review of the topic and planned a research, A. N. Tsypkin led the work of the team. All authors reviewed the manuscript.
The authors declare that they have no competing interests.