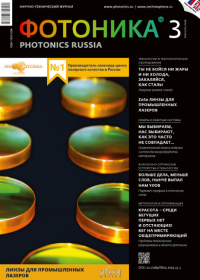 Ultraviolet lasers have a number of advantages in the market of microcutting of metallic and nonmetallic materials. The stability and reliability of laser instruments combined with machining accuracy and low mechanical stresses allow these lasers to enter the microelectronic manufacturing market. Due to the flexibility in working with a wide range of materials, the UV lasers easily adapt to the requirements of technological processes and are integrated into fast and accurate laser processing lines in the production of microelectronics. The possibilities of solid-state UV-lasers with diode pumping with radiation at a wavelength of 355 nm are given in the article.
DOI: 10.22184/1993-7296.FRos.2019.13.3.252.261