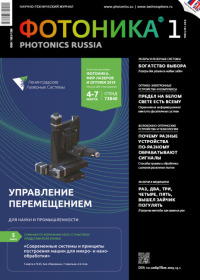 Two windows of atmospheric transparency in the infrared (IR) region of 3–5 µm and 8–14 µm almost overlap with the region of maximum transmission of germanium (Ge). Ge is transparent in the 1.8–23 µm range (although a number of phonon absorption bands are present in the 11–23 µm region), there is also a transparency window in the terahertz (THz) spectral range (~ 100–300 µm). Due to its physicochemical properties, crystalline germanium is one of the backbone materials of IR photonics and its use amounts to 25–30% of the total consumption pattern of this material. The article provides an overview of the using of the material in photonics in depending on the thermoelastic stresses arising during crystal growth, impurity heterogeneity, and structural defects.

Issue #1/2019 I. A. Kaplunov, V. E. Rogalin
Optical Properties And Applications Of Germanium In Photonics
Two windows of atmospheric transparency in the infrared (IR) region of 3–5 µm and 8–14 µm almost overlap with the region of maximum transmission of germanium (Ge). Ge is transparent in the 1.8–23 µm range (although a number of phonon absorption bands are present in the 11–23 µm region), there is also a transparency window in the terahertz (THz) spectral range (~ 100–300 µm). Due to its physicochemical properties, crystalline germanium is one of the backbone materials of IR photonics and its use amounts to 25–30% of the total consumption pattern of this material. The article provides an overview of the using of the material in photonics in depending on the thermoelastic stresses arising during crystal growth, impurity heterogeneity, and structural defects.

The intensity of the signal passing through the Ge decreases only twice after 5–10 pulses, and the damage is localized exclusively in the surface layer, i. e., Ge, as a material capable of withstanding significant radiation overload without catastrophic destruction, represents considerable interest for the pulsed CO2 laser optics.
The methods of light and electron microscopy and X-ray tomography investigated the morphology of Ge damage after exposure to radiation of the high-power pulsed CO2 laser [47]. The studies were carried out on commercially available Ge of GMO brand, processed according to optical technology, and on dislocation-free crystals, chemically polished, according to the technology used in microelectronics. It was established that in the range of amplitude values ​​of the radiation power density of 2 · 106–4 · 108 W / cm2 two main types of damage are realized. At I < 4 · 107 W / cm2, foci of local microfracture of the surface layer are observed. Local microfractures arising at I < 4 · 107 W / cm2 due to breakdown on either absorbing micro-inhomogeneities of a crystal or on defects in optical processing are the result of microexplosions forming craters. The effect of radiation at I ≥ 4 · 107 W / cm2 leads to the melting of a layer with a depth of 1–3 µm, which is explained by the avalanche breakdown of non-equilibrium charge carriers of the near-surface Ge layer, which prevents the crystal volume from being affected by ultra-threshold intensity. The nature of the impact, leading to the destruction of only the surface layer of the optical element, allows you to completely restore the elements made of Ge by repolishing.
In the range of 2.6–5 µm, the effects of two-photon [48, 49] and three-photon absorption [49] are superimposed on the nonlinear absorption process. Nonlinear absorption of radiation from a high-power non-chain pulsed HF laser was studied on Ge of various thickness and specific resistance [50]. Depending on the composition of the mixture (SF6 : C2H6 or SF6 : C6D12), the laser generated radiation in the range of 2.7–3 µm (HF laser), or 3.7–4.1 µm (DF laser). The generation spectrum of the HF laser was a set of 18 different lines in the range of λ = 2,6–3 µm (average ℏω = 0.4397 eV, corresponding to λ = 2.82 µm). Pulse width at half-height ~150 ns; maximum energy Е ≈ 5 J; the energy distribution is close to uniform.
In the case of low intensities of irradiation with a HF laser (I = 0.3 MW / cm2), in the absence of damage to the samples, a substantially nonlinear character of the transmission of radiation through Ge is observed. Figure 3 shows the dependences of the transmission of Ge (h = 1 mm) on the radiation density of HF and DF lasers, respectively, and Fig. 4. shows dependence of the concentration of nonequilibrium free carriers generated in the process of two-photon absorption over depth (calculated at time t ≈ 200 ns). Nonlinear absorption of the DF laser radiation in Ge was observed at a significantly higher radiation intensity I > 10 MW / cm2.
The transmittance of Ge in the nonlinearity region decreases noticeably with increasing sample thickness and crystal specific resistance. The power of the transmitted pulse noticeably decreases, the shape is strongly deformed, there is a noticeable shortening of the front edge. The two-photon absorption coefficient of Ge К2 = 55 ± 10 cm / GW was obtained. The effect of pulse parameters on the dynamics of the passage of a HF laser pulse through a Ge with a thickness of h = 0.03–0.55 cm is analyzed.
The intensity distribution I(z) over the thickness of Ge varies greatly within the duration of the laser pulse. The generated carriers are concentrated in a thin layer near the entrance surface of the crystal (see Fig. 4.), i. e. the main processes of nonlinear absorption occur in a layer with a thickness of less than 50 microns. The emerged peculiar nonlinear filter, as well as at λ = 10.6 µm, prevents the destruction of the volume of the material even when trying to tightly focus the laser energy into the depth of the crystal. This circumstance testifies to the great importance of nonlinear absorption processes occurring in the surface layer, e. g., the value of the recombination coefficient of free carriers on the surface may exceed by several orders of magnitude. Special doping of the surface layer can noticeably change the magnitude of the nonlinear transmission of the entire Ge sample.
Other nonlinear effects are observed in Ge [29]. The optical constants of materials are determined by the equation
P = ε0(χ(1) E + χ(2) E + χ(3) E + ...),
where P is the electric polarization induced by the electromagnetic wave, Е is the field strength, χ is the susceptibility tensor of the medium.

In linear optics, only the first term of the equation is taken into account, but when working with high-power laser radiation, it is no longer possible to neglect non-linear effects determined by other members of the equation. In crystals with a diamond structure (in particular, Ge), χ(2) = 0 at all times. For Ge, χ(3) = 1.5·10–10 units CGSE. This allows the use of Ge for the effective reversal of the wave front [51]. In the Ge plate installed in the cavity of a CO2 laser, a phase-conjugate reflection of 10.6 µm from phase gratings arising in counterpropagating waves was obtained. The reflection coefficient reached 20%. The beam reflected by such a mirror goes back along the same optical path. The use of this effect makes it possible to obtain diffraction divergence of the radiation of a high-power laser with inhomogeneities in the active medium and in optical elements.
The photon-drag effect of current carriers in semiconductors is used in photoreceivers (PR) for recording high-power pulsed laser radiation [54]. When high-power electromagnetic radiation is absorbed, not only energy is transmitted to the free carrier, but also a photon momentum, the redistribution of which leads to the formation of a directed flow of charge carriers in the crystal. Such receivers for λ = 10.6 µm are usually made of p-type Ge. The quantum of CO2 laser radiation hν = 0.117 eV is absorbed in Ge mainly due to the intraband transition between the subbands of holes with heavy and light masses. In this case, the hole perceives both the energy and the momentum of the photon. The condition for fulfilling the laws of conservation of energy and momentum makes it necessary to move holes relative to the lattice in the direction of radiation propagation, which contributes to the appearance between the ends of the crystal rod potential difference, the photon drag EMF (V). The main parameters of the PR are: time resolution up to 10–10 s, large dynamic range (10–107 W / cm2), operation at room temperature, sensitivity of the order of 0.1–1 V / MW. The time constant (τ) is described by the formula
τ = nc / L,
where: L is the length of the working crystal of the photodetector; n is the refractive index; c is the speed of light.

The advantages of such PRs include: high noise immunity, stability of parameters, the ability to produce receivers with large apertures. The maximum V is ensured by optimizing the crystal by the parameters: ρ, S, L. At room temperature, the optimal values ​​are ρ ≈ 1–10 Ohm · cm, L = 4–6 cm, and the area of ​​the receiving platform corresponds to the minimum possible cross-section of the laser beam [54].
The acoustooptic effect [52] is also a nonlinear effect widely used in photonics. The devices based on this effect are used to modulate and scan light. The passage of an acoustic wave in a photoelastic medium induces changes in the instantaneous value of the refractive index, which leads to the formation of a phase grating with a period equal to the acoustic wavelength and amplitude proportional to the amplitude of the acoustic wave and the photoelastic constant of the crystal. Ge is one of the main materials for use in acoustooptics of the middle and far infrared range, in particular, in CO2 lasers, due to the good physicochemical properties and high values ​​of the refractive index and photoelastic constants [53]. Acoustooptic modulators for CO2 lasers are commercially available (see, e. g., [55]). The high thermal conductivity of Ge makes it possible to create thermostable constructions of acousto-optic devices based on Ge crystal, which consume tens of watts of control power with a diffraction efficiency at a wavelength of 10.6 µm more than 90% [56]. Th devices are usually water-cooled. In modern technics, the laser Ge-based acoustooptic modulators are used in free-electron lasers for pulsed radiation control [57].
The most recent trend in modern photonics is the creation of Ge-based devices for modulating infrared radiation: modulation by introducing moderate levels of excess carriers into Ge by exciting diode laser radiation [58]; modulation in waveguide Ge structures on Si substrates by controlling the absorption of free carriers [59, 60].
Recently, the possibility of using germanium in the terahertz (THz) range of the electromagnetic spectrum (~3 mm – ​30 µm, 3 cm–1 – 300 cm–1) [61] is being considered. The optical properties of pure and doped Ge in the THz range were studied in [62]. In the THz range, active elements of acoustooptic devices made of Ge are of interest [63]. Ge can be used for use in multispectral infrared imaging devices of the IR + THz range, as well as in THz range lasers pumped by a CO2 laser.
Ge transmittance spectra with different ρ are shown in Fig.5. The results showed a noticeable increase in the absorption of doped Ge in the THz range, compared with the undoped (ρ = 47 Ohm · cm). An increase in the impurity concentration, both electron and hole, leads to an increase in absorption. If in the region of 25–50 µm, the effect of ρ on the transmittance of Ge (Sb) is not noticeable, then in the region of ≥220 µm it is observed firsthand.
The main absorption in the THz region occurs on free charge carriers (self and impurity). If we compare the results for Ge (the region λ ~ 160–220 µm) and the data for Si [62], then they show that the attenuation coefficient in the region of 160–220 µm approximately coincides, and is ~ 0.5 cm–1.
By contrast to the IR range, minimal losses of ~0.5 cm–1 in the THz region are observed in intrinsic crystals. Fresnel reflection losses can be largely compensated by creating periodic relief structures on the surface with a high degree of regularity and a period less than the radiation wavelength. Therefore, optical products from undoped single-crystal Ge can be effectively used to control the radiation in the THz region.
Photonics Russia. Issue #1/2019
Readers feedback
Leave a feedback