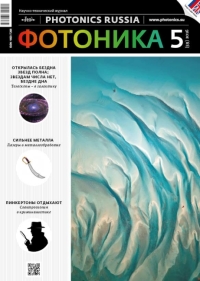 Reliability of remote monitoring results with regard to the concentration of heavy metals in soils and vegetation using the airborne spectrometric devices is limited by existing problems of equipment calibration and absence of common criteria of element identification. The method of on-line calibration of airborne spectral systems at remote evaluation of heavy metal content is suggested.

Issue #5/2016 S.S.Alieva, R.O. Huseynova
Method of calibration of remote spectrometric meter of heavy metal concentration on land plots
Reliability of remote monitoring results with regard to the concentration of heavy metals in soils and vegetation using the airborne spectrometric devices is limited by existing problems of equipment calibration and absence of common criteria of element identification. The method of on-line calibration of airborne spectral systems at remote evaluation of heavy metal content is suggested.
Теги:   calibration of the airborne spectral systems   concentration of heavy metals in soils   remote monitoring   дистанционный мониторинг   калибровка бортовых спектральных систем   концентрация тяжелых металлов в почвах
In case of contamination of environmental air, water and soil with heavy metals, human being inevitably experiences their effect on his/her health. It is well known that heavy metals, especially lead, cadmium, mercury, arsenic, can cause such diseases as cancer, pulmonary injury and neurotoxic effects. Public health care requires the necessity of establishment of different control and warning systems on the level of environmental contamination.
In the papers of many researchers it is noted [1] that the traditional methods of evaluation of heavy metal distribution in soil by the selection of sampling points and their further laboratory analysis and chemical identification have high cost and require long-term material preparation. As opposed to them, the methods of spectrometric analysis, which are integral, do not have these disadvantages. However, the direct identification of heavy metals in the capacity of inorganic contaminants of soil is complicated. The reason lies in the low concentration of these substances in soil and absence of clear specific spectral features in visible and near infrared ranges of observations. In addition, there are different combinations of heavy metals with organic substances and associations with hydroxides and carbonates. The spectral measurements of their concentration make it possible to determine indirectly the presence of heavy metals and identify their composition. Authors of the paper [2] inform that the hyperspectral measuring equipment allows obtaining sufficiently full and continuous spectral information, which is suitable for the detection of more detailed spectral properties of surface and mineralogical content of soil. This ability can be used for the monitoring of soil contamination.

Solution of the quadratic equation (5) allows determining the value CS, at which the spectral radiometer reading onboard the carrier will reach extremum during the flight of the carrier of measurement equipment above the sites with fixed values of constant equation coefficients. Taking into account obtained results, the following algorithm of online calibration of remote meter of heavy metal concentration on ground is suggested:
• Continuous determination of the values of constant coefficients of equation (5) during the flyover of the carrier of spectrometric equipment.
• Fixation of the moment, at which output signal of spectral radiometer reaches the extremum value.
• Determination of the value of heavy metal concentration at the moment of maximum of radiometer output signal in case of solution of equation (5).
DISCUSSIONS AND CONCLUSIONS
Thus, suggested calibration method of remote measurement of heavy metal concentration in soil during the carrier movement provides the generation of extremum signal at the output of airborne spectral radiometer. Analytical determination of extremum character using the analysis method of the second derivative of expression (2) on the basis of CS taking into account the expressions (3—4) results in the cumbersome expressions and it is not specified here. It should be noted that suggested calibration method of meter of heavy metal concentration at studied composite site will make it possible to obtain more reliable estimations in relation to the total contamination of studied site with heavy metals because it takes into account the properties and correlation between the components of this site.
The main conclusions of carried out studies are outlined below:
• Calibration method of the remote meter of total contamination with heavy metals in relation to the composite site, which consists of the area of non-overgrown ground and area with vegetation, is suggested.
• Algorithm of implementation of the calibration method of remote meter of heavy metal concentration at considered composite sites is developed.
Photonics Russia. Issue #5/2016
Readers feedback
Leave a feedback