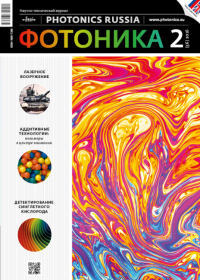 Sun photometers are universal devices used to study aerosol trains created due to sand storms, volcano eruptions, and concentration of some trace gases and water vapors in the atmosphere. But the results of photometric measurements in coastal zones are affected by the wind situation and aerosols factor. A procedure for searching optimal combinations of wind speed at the given measurement point and the relative geometric parameter of fractional components when the aerosols effect the results of photometric measurements of trace atmosphere gases can fully be compensated for.

Issue #2/2016 I.Abdurrahmanova
Explorations Into The Aerosols Effect On Photometric Measurements In Coastal Zones
Sun photometers are universal devices used to study aerosol trains created due to sand storms, volcano eruptions, and concentration of some trace gases and water vapors in the atmosphere. But the results of photometric measurements in coastal zones are affected by the wind situation and aerosols factor. A procedure for searching optimal combinations of wind speed at the given measurement point and the relative geometric parameter of fractional components when the aerosols effect the results of photometric measurements of trace atmosphere gases can fully be compensated for.
Теги:   aerosols factor   cолнечные фотометры   photometric measurements of trace atmosphere gases   sun photometers   аэрозольный фактор   фотометрирование малых концентраций атмосферных газов
It is well known that the wind situation local dynamics in coastal zones can lead to such a particulate composition of the atmosphere aerosol contaminant that will be substantially different from that of a pure marine or continental aerosol. As a typical example (Table 1), let us show results of the work [1] where percentage composition of the total aerosol in the Mexico city coastal zone was investigated.

It is reported in paper [2], when production or other sources of anthropogene aerosol including "black carbon" are present in coastal zones, that specific weather conditions on the coast (wind blowing from the sea) exert insignificant cleaning effect on the atmosphere composition. At the same time, as can be seen from Table 1, the main role in the total aerosol balance for the coastal zone belongs to the marine coarse aerosol. Its mass fraction amounts to 35%. However, in difference to the fine anthropogene aerosol, marine aerosol depends drastically on weather factors, particularly on the wind speed.

The specific effect of the wind situation on the marine coarse aerosol lies in the following. First, as the wind becomes stronger, marine aerosol concentration increases. Second, stronger wind causes redistribution of percentage composition of fraction components of the marine aerosol.

It was shown in papers [3–7] showed that the marine aerosol size distribution features a two-mode structure. As a typical example, paper [3] considers a case when high-concentration anthropogene aerosol produced by long holiday fireworks on the sea coast was present in the atmosphere for several days, and dropped down to the background level only in a week. This fact confirms the idea presented in paper [2] that "black carbon" does not degrade under the effect of atmospheric conditions and the main mechanism that lowers concentration of this type of aerosol in the atmosphere is humid and dry deposition. The lifetime of "black carbon" in the atmosphere can extend to several weeks which indicates to the importance of taking account of all components of the total aerosol during photometric atmosphere measurements in coastal zones.

The most simplified model of size-distribution of the marine aerosol particle flow F is characterized by the sum of two lognormal distributions [3]:

where fi and r0i are constants; r80 is the particle radius at 80% relative humidity; Ai are amplitudes determined by the following expressions

Such statement of the problem allows for constricting the spectrum of the considered atmospheric coastal aerosol components by excluding anthropogene aerosol from consideration, since fine anthropogene aerosol displays stability with respect to weather factors, namely to the wind. Under the circumstance, life time of this aerosol can be up to several weeks. To further constrict the spectrum of the aerosol types considered, let us analyze the measure of the marine aerosol two-mode structure. The research task can be formulated as follows: it is necessary to determine wind speed values to make the below inequation true:


Taking account of expressions (2) – (4) we obtain the inequation which when solved provides conditions for the wind speed:

Thus, structural composition of the wind-dependent aerosol in coastal zones corresponds to the canonical classification of dividing total aerosol into fine and coarse components. With this in view, as shown by authors in paper [4], the nature of wind-dependence of concentration of fine and coarse aerosol components differs substantially for aerosol sample taken in the sea portion and land portion of the coastal zone.

Let us assume a simplified measurement arrangement and place measurement points A and B in the sea and continental zones (Fig. 1). Then find expressions to calculate the aerosol total concentration on line AB connecting points A and B. According to the procedure listed in paper [3], we denote fine aerosol at point A as

And we denote fine aerosol at point B as

As a first approximation, assume that component changes as per a linear law and assumes value at point B. In this case, concentration of the fine aerosol at any point x of line AB can be calculated as follows. At first, determine coefficients and .

Hence, fine aerosol on line AB changes as per the following law

If we assume a homogeneous model of the atmosphere contamination with marine aerosol, and transfer from aerosol concentration to the optical thickness, then equation (5) can be written as follows:

where ,,, are the constants of the model under consideration and they are determined by thicknesses of the fine aerosol at points A and B. Similarly, equation (6) can be written as follows:

where ,,, are also constants characterizing the model and are determined by the aerosol coarse components at points A and B.

Hence, the aerosol total optical thickness at point x can be calculated as

where are correction coefficients; is the photometer optoelectronic i-th channel signal determined as

Taking account of the intermediate transformations we obtain the following condition for eliminating aerosol effect on the trace gases measurement result:

With the wave-dependence taken account of, and assuming , we can conclude that values and leading to the compensation of the aerosol effect can be calculated in the following particular cases:

If value Lx is fixed, then it is necessary to find value U which facilitates compensation of the aerosol effect.

If value U is fixed, then it is necessary to find value Lx which facilitates compensation of the aerosol effect.