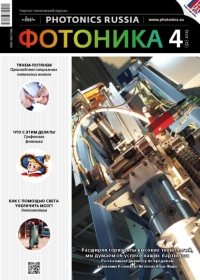 For many years the black electrically-conductive graphite was considered as the material which is useless for photonics. Over the recent years the opinion about this material has been drastically changed. It was found that when decreasing size and transiting to two-dimensional graphite (graphene) or one-dimensional graphite (single-wall carbon nanotubes and graphene nanoribbons) new unique properties appear.

Issue #4/2015 E.Obraztsova
Graphene Photonics
For many years the black electrically-conductive graphite was considered as the material which is useless for photonics. Over the recent years the opinion about this material has been drastically changed. It was found that when decreasing size and transiting to two-dimensional graphite (graphene) or one-dimensional graphite (single-wall carbon nanotubes and graphene nanoribbons) new unique properties appear.
Теги:   graphene photonics   графеновая фотоника
Historically, single-wall carbon nanotubes (SWCN) were discovered first [1]. They are represented by single-layer cylinders with the diameter of 0.3–3.0 nm and length of 1–10 µm rolled up (with various torsion angle) from the bands of graphene plane (Fig.1a). Usually, the nanotubes are synthesized in the form of ropes, which are represented by one-dimensional crystals (Fig.1b). Nanotube ropes can form extended thin films with nanometric thickness (Fig.1c). Nanotube is one-dimensional carbon structure, all atoms of which are located on the surface. Electronic and optical properties of such system are completely determined by its geometry. SWCNs can be represented by metals and semiconductors. Forbidden zone, which increases with the decrease of nanotube diameter, occurs in the electron structure of semiconductor nanotubes. It means that the material has varying optical properties.

It was found that nanotubes also have high optical nonlinearity (by 2 orders higher than widely used crystals KDP) and ultrafast periods of relaxation of electron excitations (about 100 fs). These properties gave the opportunity to use nanotubes as ultrafast modulators of light beams – saturable absorbers (SA) used for the implementation of self-mode-locking and formation of ultrashort (femtosecond) pulses in the lasers with near IR band [2–6] (Fig. 2); for the generation of optical harmonics [6, 7], for the creation of ultrafast photodetectors operating in broad spectral range [8]. These capabilities are important for the development of optical communications (using the radiation with the fundamental wavelength of 1.5 µm), laser surgery and especially ophthalmological surgery (with the radiation of 1.8–2.2 µm), sensing of atmosphere pollution (with the wavelengths of more than 2 µm) and spectroscopy with time resolution.

Formation and application of the saturable absorbers based on single-wall carbon nanotubes (SWCN) refer to the new intensely-developing field of science. The first reference of SWCN application (in the form of the film evaporated on glass) as the saturable absorber in fiber (erbium) laser was published by Japanese scientists in the theses OFC of the conference in 2003 [9]. In the next year (2004) the Russian scientists from Prokhorov General Physics Institute of the Russian Academy of Sciences (GPI RAS) implemented the self-mode-locking in erbium laser using the liquid suspension of nanotubes (Fig. 3a) [2]. In 2007 thanks to the cooperation with the Fiber Optics Research Center of the Russian Academy of Sciences (FORC RAS), the works associated with the creation of the elements for fiber lasers in the form of polymer films with distributed SWCN were successfully accomplished [4–6]. Over the recent years using the facilities of the Laboratory of Nanomaterial Spectroscopy (under the supervision of E.D. Obraztsova) in GPI RAS the complete (semi-industrial) cycle of SA formation was implemented: SWCN synthesis using the methods of arc discharge and chemical gas-phase deposition, comprehensive characterization of their properties by optical methods, formation of different types of SAs on their basis (Fig. 3b-d) and their testing in various lasers with broad range of operating wavelengths (1.0–2.2 µm).

Broad operating spectral range determined by nanotube geometry is one of their key unique characteristics. Until recently, the nanotubes synthesized by various methods (electric arc, laser ablation, chemical gas-phase deposition of methane or alcoholic fumes) have had the diameters of less than 2 nm. Over the recent years the capability of use of single-wall carbon nanotubes as the saturable absorbers in the lasers operating within the spectral range of 0.80–1.93 nm (from titanium-sapphire laser [11] to thulium fiber laser [5, 6]) was demonstrated. However, the capability to implement self-mode-locking and obtain sub-picosecond pulses is very important within the range 2.0–3.0 µm for the optical diagnostics of atmosphere and expansion of the class of lasers, which operate with the saturable absorbers based on SWCN. Recently developed aerosol method of synthesis using ferrocene in CO gas makes it possible to obtain the large nanotubes with the diameters up to 3.0 nm, absorption spectrum of which covers the range up to 3µm [12].

In 2004 graphene, the hexagonal carbon grid with the thickness of one atom, burst into the science [10]. Relatively simple method of its obtainment and recording of several new fundamental effects in the material have agitated the scientific society and brought the Nobel Prize to its discoverers – immigrants from Russia, Andre Geim and Konstantin Novoselov. For photonics, the occurrence of graphene opened the fantastic capability of creation of nonlinear optical elements with practically unlimited spectral range – from medium infrared to terahertz region [11–12]. The Russian scientists managed to make contribution into the use of graphene saturable absorbers. In particular, the saturable losses at the wavelength of 10 µm, which is typical for СО2 laser widely used in technologies, were recorded and measured for the first time [13].

Graphene has all advantages of nanotubes (high optical nonlinearity and sub-picosecond periods of relaxation of electron excitations) but due to the linear dispersion of electron energy depending on the wave vector it can be used at any wavelength, while the nanotubes are more effective for the excitation with the wavelengths matching the maximums of their optical absorption. Maximum diameter, at which the single-wall nanotubes remain stable, is limited – about 3 nm. It means that maximum wavelength, at which the saturable absorbers of SWCN will operate, is not more than 3 µm.

About 12 years have passed since the time of initial experiments associated with the use of graphene structures in photonics. Paraphrasing well-known expression we can say that graphene "is inexhaustible in the same manner as atom". Nowadays, the new ideas on the graphene use for the generation of supercontinuum in fiber lasers, increase of optical nonlinearity of the films made of doped single-wall carbon nanotubes or graphene are occurring. When designing the compact lasers based on photonic crystals [14] or on-chip lasers, graphene is considered to be the only suitable saturable absorber which is capable to retain the diminutiveness of devices. Today, in Russia more than 5 groups in different cities (in Moscow, Novosibirsk, Chernogolovka, Nizhny Novgorod, Izhevsk, Saint Petersburg) are being involved in the studies of graphene photonics. It should be noted that their results meet the international standards and are fully competitive. It is possible that the time has come to make step from the laboratory studies to the industrial design.

The work is supported by the Russian Research Foundation within the framework of the project "Carbon Photonics".
Photonics Russia. Issue #4/2015
Readers feedback
Leave a feedback