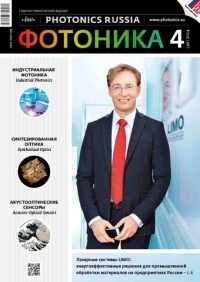 The principle of designing of optical systems with an integrated laser rangefinder is being reviewed. This principle is based on the linear polarization of the laser radiation. There are design variants provided, which feature varying optical trains of a separate rangefinder and sighting and observation systems with integrated rangefinder channels.

Issue #4/2014 A. Medvedev, A. Grinkevich, S. Knyazeva
Single-Pupillary Systems with Built-in Laser Rangefinder
The principle of designing of optical systems with an integrated laser rangefinder is being reviewed. This principle is based on the linear polarization of the laser radiation. There are design variants provided, which feature varying optical trains of a separate rangefinder and sighting and observation systems with integrated rangefinder channels.
Теги:   laser emitter   light polarization   multispectral system   quarter-wavelength plate   radiation receiver   rangefinder   receiver channel   splitter   transmitter channel   дальномер   лазерный излучатель   мультиспектральная система   передающий канал   поляризация   приемник излучения   приемный канал   сплиттер   четвертьволновая пластина
The portable optical systems for observation and aiming are used in the solution of wide range of applied tasks of civil and military subject areas. Widening of their application leads to the necessity of constant improvement of design of the devices referring to this category and attachment of new functional properties to them.

One of the areas connected with the development of aiming-observation devices includes their equipment with the systems of range measurement, particularly built-in semiconductor laser rangefinders. Such range-finding systems are considered to be the most widespread systems due to their compactness. They are used in modern hand-held observation devices and aiming systems of portable weapon.

Considering the general layout of range-finding system we will mark out two operating channels. Being transmitting device, one of them includes the laser emitter with the lens providing the required laser radiation beam divergence. The other one is receiving unit which consists of lens and laser radiation detector installed in the lens focusing point.

Evolution of range-finding systems improvement has touched various aspects of their structure: from the reduction of mass-dimensional characteristics and increase of the scope of measured ranges to the increase of reliability and accuracy of measurement of distances to objects.

As a rule, the small-size rangefinders are based on semiconductor lasers which have significant number of advantages in comparison with solid-state lasers. Ultra small dimensions, high coefficient of efficiency and small values of supply voltages and large pulse repetition frequency can be referred to the advantages [1]. However, at the same time semiconductor lasers have considerable disadvantages: they have limited capacity and large divergence of output radiation.

However, the task, connected with the minimization of dimensions and reduction of energy loss when the laser radiation passes through the whole optical path from emitter to detector, has not been solved completely. The potential of its solution lies within the design of single-pupillary range-finding systems which have one common exit (entrance) window for the transmitting and detecting rangefinder channels.

Experience has shown that application of the standard beam splitters executed in the form parallel-sided plates or prisms causes the considerable decrease of power of received and reflected laser radiation. The reason for the failure of these layouts lies within the dependence of energy parameters on the relation of coefficients of transmission and reflection of applied beam-splitting coating.

In order to exclude this loss the scheme of execution of single-pupillary rangefinder based on the known property of linear polarization of laser radiation is suggested. One combined channel is used in the optical system of such laser rangefinder in the capacity of transmitting and receiving channels. It has the entrance part which is common for both channels representing the afocal attachment. Quartz quarter-wave plate and polarization splitter are located behind it as well as the lens of conjugation optics in the focusing points of which the laser emitter and radiation detector are located (Fig.1). Construction materials of such single-pupillary range-finding system are specified in Table 1.

Single-pupillary range-finding system in the suggested design variant has the following technical characteristics:

The system functions in the following manner. Radiation which is linearly polarized from the emitter 1 is collimated by the lens 2 changing its initial divergence to the divergence close to zero. Radiation beam with small divergence gets on the polarization splitter 3 oriented in certain way which completely lets through the transmitted radiation with the direction of linear polarization which is parallel to the plane of incidence. Then, the beam goes through the quartz quarter-wave plate 4 transforming the linear polarization into the circular one and after the afocal attachment 5 it hits the target. In the light beams reflected from the target the polarization type is kept but the direction of electric field rotation vector is transformed into the opposite one. In this case, upon the reverse passage through the afocal attachment 5 and repeated incidence on the quarter-wave plate the radiation transforms the circular polarization into the linear one. But its direction becomes perpendicular to the direction of the beam outgoing from the laser emitter (perpendicular to the plane of incidence). Orientation of polarization splitter excludes the passage of the beam with transformed polarization direction. Therefore, the radiation is completely reflected from the sloping internal edge of prism-cube and focused by the lens 2’ on the radiation detector 6 not getting on the laser emitter 1 practically. And the power of reflected laser radiation getting into the photodetector which transforms the light energy into the electrical one is proportional to the coefficient of reflection of light splitting surface for the laser beams with the orientation perpendicular to the plane of incidence.

On the basis of this principle it is possible to construct the rangefinder as independent unit; also the single-pupillary system can be built in various aiming and observation devices quite successfully. The optical system of single-pupillary sight unit-rangefinder in which all channels function through one lens is shown in Fig. 2 in scaling relation.

The visual channel of sight unit has quite high parameters. The main technical characteristics of single-pupillary sight unit are specified in Table 2 in comparison with the characteristics of different brands of analogous sight units produced by well-known companies. Such sight unit of twilight type ensures the required quality of image for 8 millimeter size of pupil, the maximum value reached at the low illumination of area. The values of the calculated diameters of diffusion circles are given in Fig. 3.

Let us calculate the indices of system quality on the basis of the values of lateral aberrations in the focal plane of paraxial lens with the focal distance of 100 mm installed on the exit pupil of the device. We will take into account the ratio of lateral and angle aberrations (10 μm = 20.6 arc seconds) which is typical for such scheme. Then, the image quality by the mean square deviation will be in the considered 6-fold sight unit in the center of field of view:

Proceeding form this evaluation we can state with assurance that under the day conditions upon the sufficient level of illumination decreasing the eye pupil to 4 mm the sight unit can fully ensure the resolution of the order 10–15″.

One more application of the considered principle of rangefinder installation consists in the single-pupillary multi-spectral optical system alternatively containing the thermal imaging, television channels and built-in rangefinder based on semiconductor laser.

The optical scheme of single-pupillary multi-spectral optical system with built-in laser rangefinder is shown in Fig. 4. The multi-spectral system contains common entrance channel: meniscus lens – 1, spectral splitting plate – 2 (with dichroic coating letting through the spectral range of 8-14 μm and reflecting spectral range of 0.6-0.9 μm); optical channel (in the direction passing through the spectral splitting plate 2); positive lenses 3 and 4; optical channel (in the direction reflected from the plate 2). The optical channel in the reflected direction is designed in two-component form – the spectral splitting cube 9 is installed between the first component (lenses 6, 7, 8) and second component (lenses 10, 11, 12). The cube lets through the radiation with the spectral range of television channel (lenses 6, 7, 8, 10, 11, 12) and reflecting spectral range of range-finding channel (collimating two-component optics – 14, 15, quarter-wave phase plate – 16, polarization splitter – 17). Polarization splitter splits the range-finding channel to the radiating and detecting parts and each of them contains two-component conjunction lens – 18, 19 and 21, 22.

Parameters of such version of optical system:

For the range-finding channel at the wave length of laser diode of 0.905 μm:

For the observation channels the value of polychromatic coefficient of contrast transfer (CCT) is assumed to be the quality evaluation criterion. The quality of single-pupillary multi-spectral optical system is illustrated by the data given in Table 3.

The following data is taken into account in calculations: