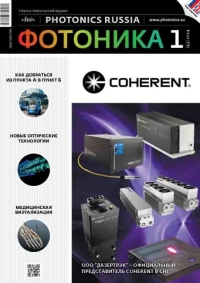 The main applications of high-power laser systems are fundamental and applied research activities in the area of inertial thermonuclear fusion, interaction of high-power laser radiation with the substance. The article briefly describes the main principles of construction of the universal electrical power supply system for high-power multi-channel diode-pumped laser jet.

Issue #1/2014 A.Temnikov, A.Gayoso de los Santos, Z.Pavlova, A.Fedorov, A.Kolesnikov
Electrical Power Supply Systems for Multi-Channel Diode-Pumped Lasers
The main applications of high-power laser systems are fundamental and applied research activities in the area of inertial thermonuclear fusion, interaction of high-power laser radiation with the substance. The article briefly describes the main principles of construction of the universal electrical power supply system for high-power multi-channel diode-pumped laser jet.
Теги:   diode laser pumps   power lasers electric supply   диодные лазеры для накачки   электропитание мощных лазеров
From the point of view of enhancement of laser systems efficiency, progress in the area of laser physics and engineering is connected with the creation of high-power rules and matrices of laser diodes as well pumping systems of high-power solid-state lasers which have high specific characteristics and reliability. According to the information of LaserFocusWorld magazine, diode-pumped lasers accounted for 49% in the total amount of lasers in 2013.
As a rule, for the electrical power supply and control of laser systems with the pump power up to 5 kW monoblock construction is used. If the pump power of laser system is more than 5 kW efficiency of monoblock construction application begins to be inferior to the systems based on module construction. High-power laser systems are mainly multi-channel systems with the pump power of every channel of not more than 5 kW. Thus, when applying the module principle every module unit feeds its pump channel of laser system.
The main advantages of construction of the electrical power supply systems for high-power lasers on the basis of such principle are:

accessibility of element base;
ability to rearrange system for the required amount of pump channels;
easy transportation;
repairability.
For the first time Fedal Ltd company faced the necessity to construct the power supply system using module principle when working with the solid-state flashlamp-pumped lasers. Laser was intended for the glass thermal split, it had three pump channels with the lamps INP 16/250E. Power supply system for this laser included 3 high-voltage ordinary modules with built-in synchronization system, 3 ignition blocks and 3 condenser batteries. Afterwards, the company constructed multi-channel power supply systems for the lasers pumped by the lamps INP 16/250E and INP 18/850E.
Power increase of the diode-pumped lasers made it possible to apply the knowledge obtained upon the design of flashlamp-pumped systems in the area of laser diodes.
In order to solve the tasks on the power supply of high-power diode-pumped laser systems the power source SF308 with the average output power of 5 kW was developed. Modification SF308 was designed on its basis for the multi-channel lasers; it differs by the absence of display and controls.
Power source SF308 is the current pulse generator based on the principle of the partial discharge of capacity energy storage (CES).
For CES charge the resonance transistor inverter is used. Control system tracks the voltage level of storage device and turns on the inverter when the voltage decreases below the given value. In order to exclude the control system failures during the period of formation of load current output pulse, turning on function of the inverter is blocked.
The form of current pulses obtained in the generators with CES is similar to the squared shape, flat part of the pulse has exponential decay. It is obvious that the value of this decay will grow with the increase of pulse duration. Of course, practically flat pulse top can be achieved by increasing the storage capacity considerably, but such approach is not reasonable from the economical point of view. Besides, the excess energy of large storage device in emergency operation (omission of key break) can cause the load disturbing. Accordingly, the necessity to correct the current pulse form occurred for the purpose of decrease of the decay value of flat part upon the acceptable storage value.
This task was solved with the help of completely-controlled transistor key which allows correction of the current pulse form and plays the role of protection against current surges which can disable expensive laser diodes.
In order to combine the power sources into unified multi-channel system the synchronization device SF700 was designed. This device is intended for the simultaneous or discrete control of several laser power sources manufactured by Fedal Ltd. Device has the power supply control system for the sources unified into the stack, sources control interface and system of generation of synchronization pulses. Communication between SF700 and power sources is accomplished on the basis of fiber-optic network or interface RS232. Power supply sources in the amount up to 8 items can be connected simultaneously to one synchronization device. For the laser systems with more than 8 channels, the capability of SF700 combination with the network is provided on the basis of RS485 protocol or optical fiber. Galvanic insulation of all communications as well as capability of usage of optical communication ensures high interference protection of the jet in general.
Power sources SF308 and synchronization devices SF700 give the opportunity to assemble universal electrical power supply
Photonics Russia. Issue #1/2014
Readers feedback
Leave a feedback